Michael Muhney Hints On Twitter: Moving to General Hospital and Adam Newman Better Dead on The Young and the Restless? 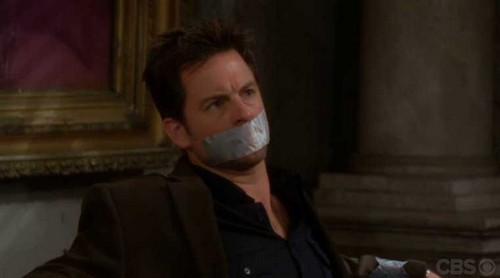 It has been a long six months for Michael Muhney’s most loyal fans. The actor was fired from the CBS soap The Young and the Restless last December amid a scandal that had soap fans rallying and protesting for months. After his final scenes aired many believed that even if Y&R had offered him his job back it was in Muhney’s best interests to keep walking with the real question being where he would turn up next.

At first we thought that maybe he was letting all of the dust settle and then Muhney was going to head on over to General Hospital to portray the plum role of Jason Morgan. It almost made too much sense for him to do that, basically swapping one great character for another and now as time goes on it seems that Muhney himself may have other ideas – we can’t be certain

If you have followed his Twitter feed then you’ve seen lots of nuggets about breaking down and finding hope in the last month. While the actor knows better than to say very much outright he sure is great at the cryptic, poignant clues. Muhney tweeted that he doesn’t believe in reincarnation – a comment that appeared to come out of nowhere and I have to wonder if he is talking about his career. Is it intended to be a clue that he has no intention of breathing life into another character (like Jason) as a recast? Or is he referencing his soap life in general and cluing us in to the fact that he is done with the genre, at least for now? Or more likely, is it a subtle slam at Jill Farren Phelps bringing Adam Newman back to life on Y&R?

Do you think his firing last winter left such a bad taste that he doesn’t want to be connected to soaps at all now? Or do you think Muhney will still jump at a great role on GH if it’s offered to him? Is he purposely taking time off or do you think that he has been quietly auditioning and nothing has panned out yet – or perhaps he is already hired but keeping this under wraps? Tell us your thoughts in the comments below!

Update: Michael just tweeted a famous quote: “You”ve got 3 choices: Give up. Give in. Or give it all you got.”  What could he mean? Never forget that MM’s contract and separation agreement with CBS stipulates what he can and can’t disclose. Consider that Michael must communicate to a great extent using innuendo and hints!