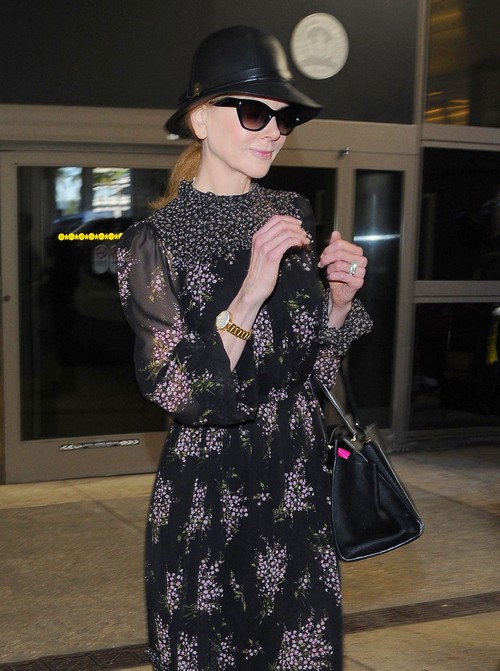 Keith Urban and Nicole Kidman’s possible break-up and divorce have been speculated about for months now. The fact that Keith’s career is blowing up right now and Nicole’s acting career is fizzling have been rumored to cause a huge rift in their marriage, among other things. Since Keith went out on tour to promote his recent albums, he and Nicole now go months without even seeing each other, which is not healthy for any couple.

According to the October 27th edition of GLOBE Magazine, Nicole Kidman has decided to be proactive about saving her marriage to Keith Urban and is determined to avoid their imminent divorce. GLOBE reveals that, “Nicole Kidman is turning herself in to a country cutie in a bid to save her troubled marriage to Keith Urban. The Nashville based actress wowed fans with her sexy new look of tousled blonde locks, bare shoulders, and a country fresh smile a few days ago. It’s far removed from the prim and proper styles she normally sports.”

A makeover is just part of Nicole’s dramatic transformation. GLOBE also reveals that the actress is planning to record a country music album so that she and hubby Keith Urban can go on the road and tour together. She thinks that closing the gap between her and Keith will fix her marriage, and remove any opportunities Keith has to stray from her.

Nicole Kidman has always been rather proper and uptight, we can’t even imagine her on a stage at a wild concert in cowboy boots with beer cans being tossed at her. It’s actually pretty hilarious to envision. Nicole “going country” might actually have the exact opposite effect on her marriage she is hoping to achieve and could scare Keith Urban away. So, will you be picking up Nicole Kidman’s country album when it hits stores? Just for laughs? Do you think she and Keith Urban’s marriage can be repaired, or should they just cut their losses and file for divorce now? Let us know what you think in the comments below!