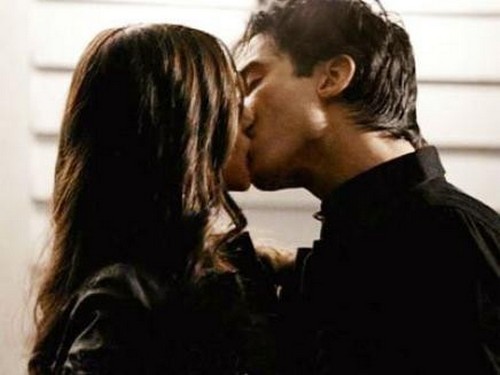 Of course, that didn’t prevent them from getting back together, did it? Although the duo refuses to comment on their relationship, we’ve been hearing that they’ve been back together for a while now. Apparently, they rekindled their romance on the set of the Vampire Diaries, which isn’t hard to believe when you consider how many romantic scenes they probably had. However, with Ian’s recent exit from the Vampire Diaries [although he’ll undoubtedly make guest appearances in Season 6], it’ll be interesting to see how their relationship progress.

The Vampire Diaries was, after all, where Ian and Nina met and fell in love with each other. It’s also where they broke up, which led to many months of awkward on-set tension. But alas, Ian has to leave the show [more or less] just when they get back together. Honestly, they probably planned it that way, and they’re not stupid enough to think that they can hide their relationship forever.

Ian knows that the rumors of Nina dating Dominic Howard are just that, rumors and he is more in love with Nina than ever. In fact, some sources even claim that Ian and Nina are both planning on revealing their romance after the end of Season 6, which is the limit of most of the cast’s contracts. So far, we’re assuming that the show ends after Season 6 if the actors don’t manage to renew their contracts, but even if it doesn’t, there’s simply no way that Ian and Nina will be able to hide their relationship that long. Then again, they did manage to keep it a secret for almost an entire year when they first began dating.