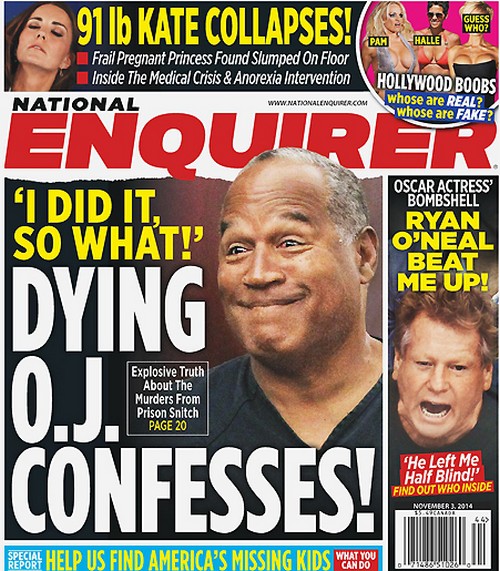 It’s been twenty years since the untimely murders of Nicole Brown Simpson and her friend, Ron Goldman. Everybody knows who murdered them, but in what was considered a huge fail on the part of the judicial system, OJ Simpson got away with nary a prison sentence. Of course, karma would come back to bite him in the ass, since he later went to jail for armed robbery and is still serving out his sentence.

According to the latest cover issue of the National Enquirer, OJ Simpson has made a deathbed confession while in prison, admitting to murdering Nicole Brown Simpson and Ron Goldman. Apparently, OJ came clean to a prison ‘snitch’, with this snitch reportedly telling the Enquirer, “O.J. believes he’s going to be dead soon and doesn’t want to go to hell. He was determined to get it off his chest.”

This insider also added, “Now O.J., on his deathbed, has finally copped to the brutal slaughters of Nicole and Ron. He said, ‘I did it, so what!’ O.J. added, ‘Yes, I killed the b—h – and I’d do it again if I had the chance!’”

Well, of course he would do it again he had the chance – he didn’t get caught! He most likely brutally murdered Nicole and Ron and walked away scot-free, so he really didn’t pay any penance for that crime. It may have caught up with him later, but a twisted man is a twisted man. Prison clearly didn’t make much of a positive impact on OJ Simpson, but at least he’s admitting to the murders now – fat lot of good it’ll do him from a prison cell. He’s been asking to be released on good behavior for the past few years, and the judge always turns him down. I can’t imagine this little admission – accurate or not – will do much to sway the judge in his favor.