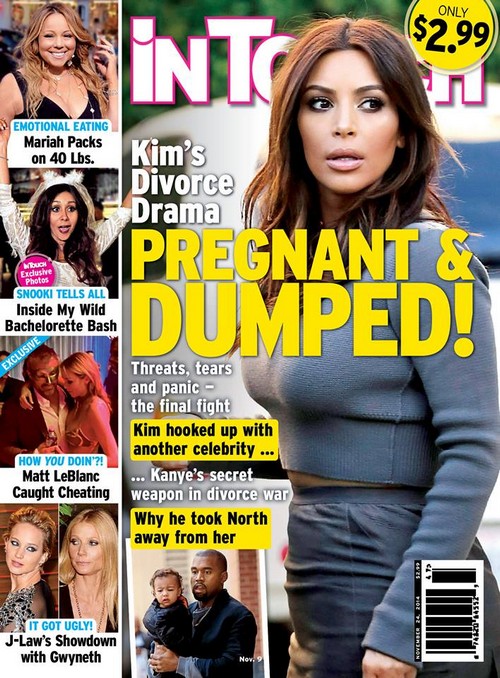 CDL reported a few days ago that Kim Kardashian looked like she was pregnant and rocking a baby bump, and it turns out we weren’t the only ones that noticed. All the photoshopping for Kim’s Paper Mag nude display of tastelessness made sure to eliminate any baby bump evidence so make sure to discount what you see there. The Keeping Up With The Kardashians star landed that cover of the November 24th edition of In Touch Magazine, for some reason we doubt she’ll be celebrating as much as she has celebrated her cover spread’s in the past. The In Touch cover screams in bold letters, “Pregnant & Dumped.” And what’s even worse is that Kim is accused of cheating on Kanye West by hooking up with another celebrity – all of which leads to divorce of course!

It seems like every week a tabloid is breaking up Kanye West and Kim Kardashian, with a new divorce but this cover of In Touch seems to have a lot of details to back up their story. So, either the writers at In Touch are just getting way more creative than they were before, or there is actually some truth to their November 24th report. The all new In Touch cover reveals, “Kim’s Divorce Drama – Pregnant & Dumped. Threats, tears, and panic…the final fight. Kim hooked up with another celebrity, Kanye’s secret weapon in divorce war. Why he took North away from her.”

We already thought Kim looked pregnant and she’s a major flirt so we wouldn’t be surprised if she hooked up with another celeb. But, we’re going to have to call bullshit on the claims that Kanye “took North away from her.” Took North where? If he is going to punish Kim, then he should leave North with her and make Kim take care of the baby herself. Sorry, we just don’t see Kanye playing the “single dad” card.

Apparently there is also a report on Jennifer Lawrence and Gwyneth Paltrow’s scandalous feud over Chris Martin, which is irrelevant seeing as how JLaw and Chris are no longer even together. And in other news Matt LeBlanc is reportedly a cheater, and Mariah Carey has now packed on a grand total of 40 pounds because Nick Cannon cheated on her.