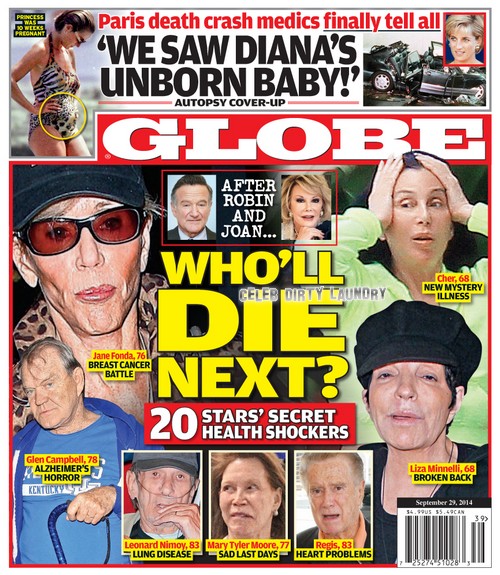 The cover of the September 29th edition of GLOBE Magazine reveals that there may actually be some merit to the conspiracy theory surrounding Princess Diana’s death. GLOBE never tip-toes around controversial topics, the cover of the magazine screams “Paris Death Crash Medics Finally Tell All: We Saw Diana’s Unborn Baby – Autopsy Cover-Up.” GLOBE also states that Princess Diana was 10 weeks pregnant at the time of her death. For those of you who aren’t familiar with Princess Diana, she was killed in a fiery car crash in Paris with her boyfriend Dodi Fayed, their chauffeur Henri Paul, was revealed to be under the influence of alcohol and paparazzi chasing their car are also believed to have contributed to the accident. Some people believe that the Royal Family orchestrated the accident to spare themselves the embarrassment of Princess Diana giving birth to an illegitimate child and blessing Prince William and Prince Harry with a half brother or sister. If there was a conspiracy, then there is no doubt in our minds GLOBE magazine will be able to uncover it.

According to the September 29th cover of GLOBE magazine, this week the magazine also has in-depth coverage of iconic entertainment men and women who are on battling serious illnesses. The cover reads, “After Robin And Joan Who’ll Die Next?” We are all still reeling from Robin Williams and Joan Rivers’ deaths, but according to GLOBE we could lose several more iconic celebrities before the year is over. The magazine reveals that Mary Tyler Moore, Jane Fonda, Cher, and many more are currently fighting losing battles again severe illnesses.

We can’t wait for GLOBE magazine to hit the newsstands this week so we can get you all of the juicy details on Princess Diana’s autopsy cover-up. Do you think that Princess Diana was pregnant with Dodi Fayed’s baby when she was killed? Could the Royal family have really done the unthinkable and orchestrated the car accident? Don’t forget to check CDL later this week for a recap of all of the juicy gossip in the September 29th edition of GLOBE magazine. This edition of GLOBE can’t be missed – I’ll be rushing out right after work to get my copy.