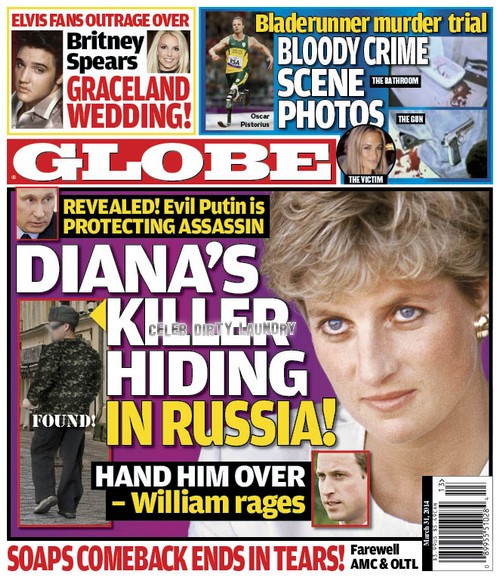 Many people believe that Princess Diana’s death in Paris 16 years ago was no mistake but rather a very calculated hit. If that is the case then quite obviously, her killer has gotten away with it. Last summer, shortly after the birth of Prince George, Queen Elizabeth handed a hugely important dossier over to Prince William. It includes all of the findings from her private investigation of Diana’s death and her belief also seems to be that something sinister did indeed happen. Elizabeth believed that this should be left in William’s hands and then he could decide whether or not he wanted to avenge his mother’s murder.

According to the March 31st print edition of GLOBE Magazine William is indeed on the trail of the man whom he believes to be responsible. It seems that the trail comes to a screeching halt in Russia and William has rallied for Putin to turn over the accused assassin. Of course Putin doesn’t seem to really want to cooperate with any one these days and so even if this person is holed up in a Moscow apartment, that doesn’t mean that Putin will care to do anything about it. In fact, given Putin’s refusal to hand over Edward Snowden to Obama it seems highly unlikely that he’ll help the British Royal Family – especially given the current climate since his seizure of Crimea.

Have you followed the Oscar Pistorius trial? The “Blade Runner’ was accused of killing his model girlfriend, Reeva Steenkamp in cold blood last year and the March 31st print edition of GLOBE has all of the latest trial details and actual bloody crime scene photos – I’m almost afraid to look! Do you think that he will be  found guilty?

Elvis fans are outraged over the gall of Britney Spears and her minders to plan a Graceland wedding! Come on Britney, have a little class and show some respect to your betters.

GLOBE is the only news magazine brave enough to examine and expose Russian collaboration in protecting and hiding Diana’s assassin. Putin is power-crazed despot and Prince William will have his hands full trying to get justice for his mom. The articles and photos in this week’s GLOBE couldn’t be more enticing. I’m looking forward to curling up in my favorite chair with my March 31st edition of GLOBE for some great reading – don’t miss getting your copy!