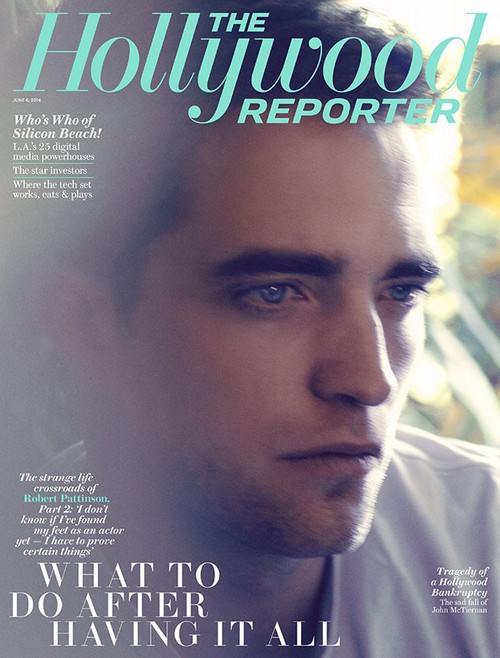 Robert Pattinson is probably the only actor in the post-Twilight set that is self-aware enough to realize that his career hinges on the decisions he makes over the next two years. As such, he’s been very careful about the choices he’s made and the films he’s worked on, and it’s pretty obvious that he’s running away from stardom.

Rob covers the latest issue of the Hollywood Reporter to promote The Rover, which recently premiered at the Cannes film festival to strong reviews. In the very long and extensive interview that accompanies the cover shoot, Rob reflects upon everything from fame to his career, and also speaks briefly about the Kristen Stewart situation.

Although he refuses to discuss the cheating scandal, he does admit that he’s still in touch with Kristen, although he kind of glosses over the whole situation pretty quickly. I mean, we knew that he was in touch with Kristen until last fall, but if they really were on friendly terms, why did they go out of their way to avoid each other at Cannes? And why are they never spotted together? Yes, they know the media would jump to conclusions, but since when they have cared about what the media thinks? It’s an interesting situation, and one that I don’t think Rob will ever be comfortable discussing in interviews.

However, he is pretty open about everything else, including his crippling anxiety whenever he has to do auditions. He also discusses his new method of cold calling directors that he really admires, and how it took him a ‘long time‘ to realize that he was in a position to do that. Of course, he still has quite a ways to prove himself, but he and other franchise stars like Daniel Radcliffe and Emma Watson seem determined to show their acting mettle. Unfortunately, I don’t think any of them – apart from Dan, perhaps – will achieve what Jennifer Lawrence has achieved, in that she’s become a major box office star, critical darling, and Oscar winner all at once.

But regardless, now that Rob has Twilight behind him [and for once, he doesn’t diss the franchise], he’s looking forward to dabbling in more adult fare, and seems quite averse to doing major blockbusters. I don’t think he’s necessary turning them away, but he’s probably not offered anything that he really connects to. He also admits that he’s moved out of the Los Feliz house that he and Kristen were sharing, and although he once again doesn’t mention her name, he does add that the house is too big for one person.

In the end, Rob still has a ways to go before establishing himself as an actor worthy of awards consideration, and creating an identity for himself that is separate from Twilight and his relationship with Kristen. Right now, he’s most associated with those two things in the eyes of the public, but with enough hard work and dedication, he can change that – and he knows it.