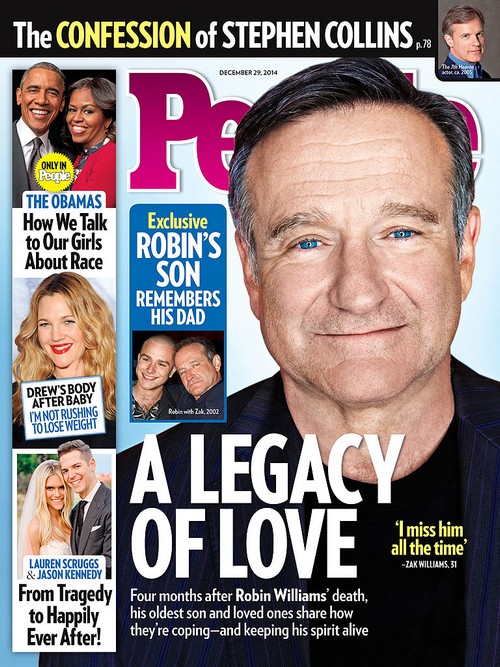 Robin Williams is featured on the cover of the latest issue of “People” magazine. This week’s issue centers around the late actor and comedian’s son Zak in a new interview. Williams took his own life on August 11, 2014 after it was revealed that he was battling cancer as well as Parkinson’s Disease.

It’s been four months since the legendary actor committed suicide and for his children, it still stings. Robin’s oldest son Zak said, “I miss him all the time. Often I see something or if I’m watching a film, I think, ‘Oh man, he would have appreciated this’ or ‘He would have gotten a laugh out of this.'”

When talking about how much he and his siblings Zelda and Cody all miss their dad, he said, “There’s not a day that goes by that we don’t think about our dad.”

Family friend Marlo Thomas said that the actor had a gift for connecting with younger patients at St. Jude Children’s Research Hospital. She revealed, “One of them liked toy soldiers, so Robin sent him his own toy soldiers that he had saved all those years of his childhood. When he came there, it was like magic.”

To honor his father’s spirit of giving back to the community, Zak says that he’s been volunteering at a local prison. He added, “It’s through helping others that I’ve begun to heal.”

It’s sad that the world lost such a funny and fun-loving guy, but it just goes to show you that people can hide the fact that they are secretly battling their own demons and even put that with a smiling face. His loss is felt by the entire world and we will be reminded of that once again when his movie “Night At The Museum: Secret Of The Tomb” is released in theaters. He was depressed and no one knew of his struggle. Sad.