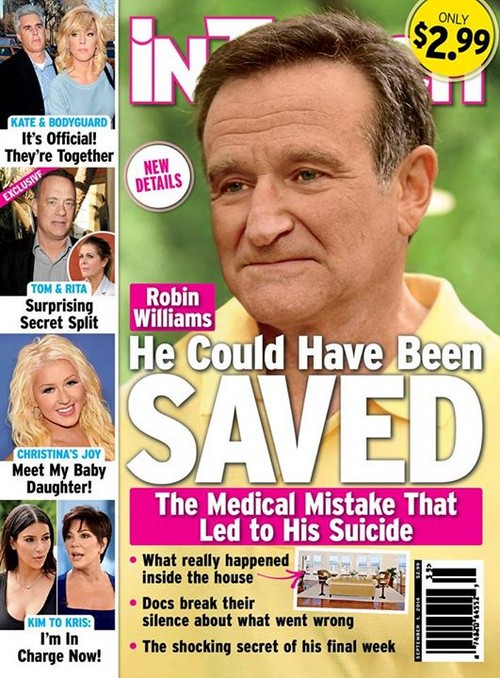 We have tip-toed around the notion that Robin Williams death could have been prevented pretty much since day one. Obviously, if someone really wants to kill themselves then they are going to find a way to do so, however there are variables in this instance that are really sad. Like the fact that the actor was left alone for at least 12 hours while his wife, Susan Schneider, was at home in the house. There are questions about why she didn’t check in on her admittedly suicidal but apparently those aren’t the only questions being raised.

According to the Sept. 1st print edition of In Touch Weekly Robin’s death also may have been prevented if not for a medical mistake. There are rumors that he may have also been recently diagnosed with cancer and that an illness like that may account for his recent weight loss and increased depression. Regardless of the real variables my guess is that a lot of people close to him must be over-thinking what they did versus what they could have done to help him.

Are Kate Gosselin and her married bodyguard Steve Neild officially a couple now? According to In Touch they might actually be going public and confirming their relationship which has been under scrutiny for the last few years. Has Neild finally left his wife for Kate? Speaking of couples’ news, sources say that Tom Hanks and Rita Wilson have split on the downlow. Could it be true? They are one of Hollywood’s longest running couples and one of the few success stories when it comes to marriages- or at least they were!

Has Kim Kardashian finally taken control of her own life? Rumor has it that she has told momager Kris Jenner that she is now the boss. I guess the real question is whether or not Kanye West is actually calling the shots. Do you think he is? Tell us your thoughts in the comments below!