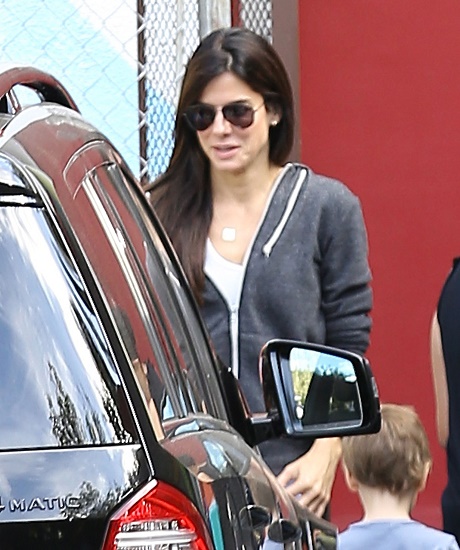 Sandra Bullock has a reputation for being the least lucky celebrity when it comes to finding love. And, rumor has it, that Sandra’s longtime crush, George Clooney, and his engagement to Amal Alamuddin, is causing the actress to experience some mixed emotions. It seems like all of the major celebrities are tying the knot this year, and poor Sandra doesn’t even have a boyfriend. But, all of that could change, because Sandra Bullock has been out on the prowl, and has a very capable wing-woman in her corner.

According to the September 22nd edition of OK! Magazine, Sandra Bullock has been hitting the town on a regular basis with her hilarious new BFF Chelsea Handler. The magazine goes on to say, “Chelsea and her divorced gal-pal Sandra Bullock were recently spotted chatting up single men at West Hollywood’s Soho House.” According to OK!’s inside source, “Sandra can be introverted, so she loved going out with Chelsea because she is so outgoing. Chelsea helps her meet guys.”

We’re not really sure if Chelsea Handler helps Sandra meet guys, or helps her scare them away, but regardless, at least Sandra is putting herself out there. Bullock has been rumored to be dating Chris Evans because the pair were spotted together out in public a few times; however, it must not have been that serious if Sandra is still prowling bars and restaurants with Chelsea Handler and hunting for some man candy.

How random is it that Sandra Bullock and Chelsea Handler go out on the town together? Can you imagine the two of them hitting on single men together? Let us know what you think about Sandra and her bizarre wing-woman in the comments below!