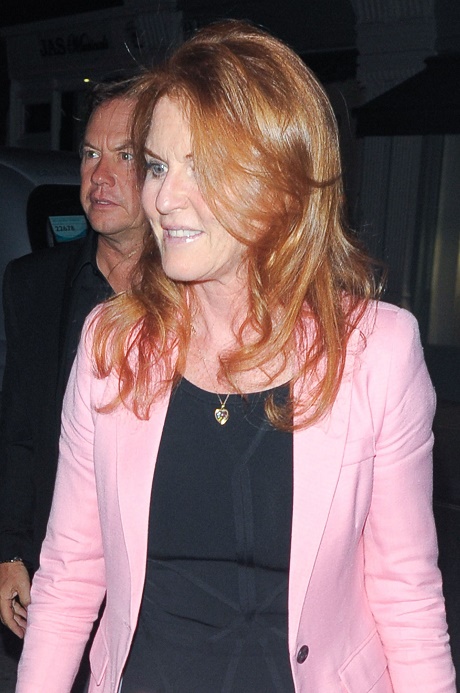 Sarah Ferguson and Kate Middleton are not BFFs by any means, but they’re both part of the royal family. As such, Sarah couldn’t exactly say what she was thinking when she was asked about the “Kate Middleton pregnant” news, which would probably have been on the lines of ‘ugh, she’s pregnant again?’

However, the Duchess of York instead told Closer Magazine [at the Cantor Fitzgerald and BGC Partners Charity Day in New York City], “Oh, yes. It’s magic to be able to bring new life to the family — to any family.”

You can almost see her saying it, no? In an airy, ‘I’m-so-above-this’ voice, no less. Trust me, most of the royals detest the fact that Kate Middleton gets so much attention, especially when they’re doing charity events like this. I’m not saying that Sarah Ferguson has ulterior motives in hosting these types of events, but it probably grates on her that the most publicity surrounding the event will come from her comments regarding Kate’s birth.

She does try to move the topic towards the actual purpose of the charity, telling Closer, “It’s extraordinary that BCG is so generous to do this, because it gives charities a chance to be heard. Anything we can do to give back, we like to do that.”

The annual charity day commemorates the employees who lost their lives during the 9/11 attack, and it’s certainly an important cause to remember. But as much as Sarah would like to focus on that, the world doesn’t agree with her. Right now, Kate Middleton’s second pregnancy trumps all other news, and it’s something the Duchess of York and every other member of the royal family will have to get used to. Fergie just has to seethe in private, which she most certainly has following the royal wedding snub. But in public? Well, she’ll just have to suck it up and pretend she’s happy for Kate.