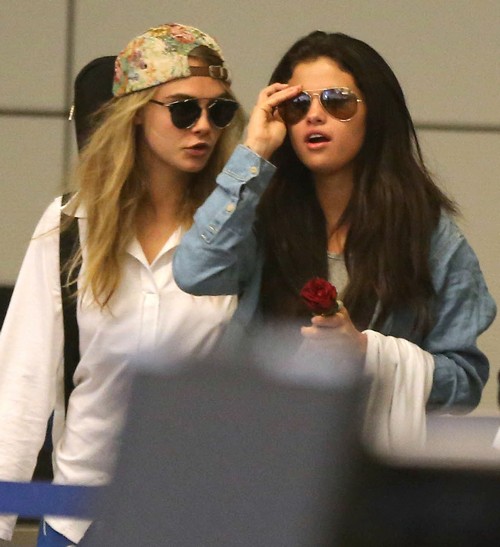 Selena Gomez just returned from partying in St. Tropez for her birthday, abandoned by her friends, her ex-boyfriend, and her family. You can’t help but feel a little sorry for her, especially as she’s now resorted to partying with Cara Delevingne. In Selena’s state, I don’t know if Cara is the best person to be hanging out with, much less partying with in a place like St. Tropez. The drugs, alcohol, and rampant partying run wild whenever Cara’s around, and Selena’s already close to ending up back in rehab as it is.

You’re an adult, Selena, act like it! She’s clearly stopped caring about her public image and her career, especially since her breakup with Justin Bieber. She’s still smarting over their breakup, and she’s been acting up more than usual after it happened. She’s been partying more, she’s been drinking more, and she’s been hanging out with a lot of Hollywood’s most notorious party animals, i.e. people like Cara Delevingne.

Is this all a cry for help, or has Selena truly stopped caring about her health? After what she went through earlier this year,  you’d think that she just wanted to cut out all the negative influences from her life. I mean, she stopped talking to the Jenner sisters because they were supposedly bad influences, but how is Cara Delevingne any better? More and more, Selena’s starting to look like a hypocrite, preaching one thing and practicing another. She tweets about loving yourself, but she sure doesn’t act like she does. She claims she wants to live a peaceful life without partying, but she continues drinking and taking drugs. She says she wants to remove the negative influences from her life, but she hangs out with people like Justin Bieber and Cara Delevingne. The girl’s obviously got some issues, and I don’t think they’re going to go away without some serious help.

Selena Gomez and her new BFF Cara Delevingne arriving on a flight at LAX airport in Los Angeles, California on July 24, 2014. Selena and Cara were returning from Saint-Tropez where the two partied hard for Selena’s 22nd birthday.