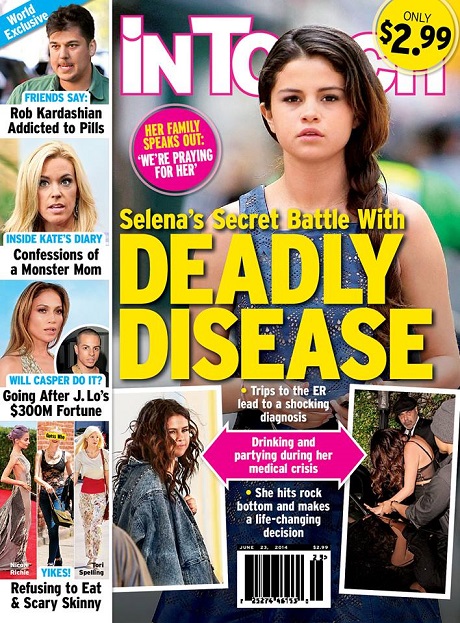 When Selena Gomez initially graduated from the unofficial Disney program with a rabid fanbase and great reviews following the end of The Wizards of Waverly Place, I don’t think anyone could predict her downward spiral in just a few years. She hasn’t had a cinematic hit since Spring Breakers [although calling that a hit is questionable], and her public image has been in the gutters since she got back together with Justin Bieber.

Justin, as we mentioned, is pretty much the worst thing that can happen to anyone in showbiz right now. And for reasons we could never quite comprehend, Selena would always, always go back to him. But perhaps the reasons for her actions are finally coming to light?

According to the latest cover issue of In Touch Weekly, Selena is currently battling a deadly secret disease, which she just got diagnosed with after several visits to the ER. Not knowing what to do or how to deal with it, she’s been acting out through her partying and drinking, although she hit rock bottom pretty quickly. The report suggests that she’s attempting to make a lifestyle change, but if the rumors of her reunion with Justin Bieber in Canada are true, then clearly she’s not that intent on this ‘change’. Either way, it’s still quite sad to see a promising young star throw her life away, whether it be due to an actual illness or the infection that is Justin Bieber.

In Touch also suggests that Rob Kardashian, he who has gained about a 100 pounds in the last year, is addicted to pain pills. Apparently, Rob has turned to narcotics to lose weight, since clearly, exercise and hard work aren’t going the trick.

Finally, Casper Smart, the long-time hanger on Jennifer Lopez‘s career a.k.a. her ex-boyfriend, is supposedly planning on going after J.Lo’s fortune. Hah. I’d love to see that happen, only to see him get shot down so fast that he goes crawling back to where he came from.