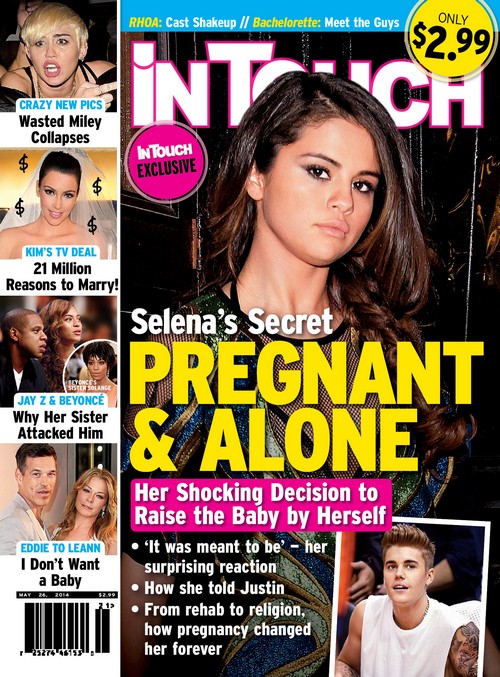 Selena Gomez hasn’t been spotted at any crazy parties recently, and we just assumed it was because she had broken things off with her idiot paramour, Justin Bieber. However, reports now claim that it’s because Selena is pregnant!

Um, the likelihood of Selena actually being pregnant is very, very low. Let’s be real, the girl is so young, and I doubt she’d be willing to go through with having a child if she did get pregnant. Forget the immediate implications on her career, the media would go nuts and stalk her, and she knows it.

Anyway, it’s from a tabloid, so all know what’s coming. According to the report [which originated from this week’s In Touch Weekly], Selena’s ‘pregnant’ AND ‘alone’, and that’s exactly how it would play out if she really was pregnant. Justin Bieber isn’t exactly dad material, and he would never agree to raise the child with Selena. However, Selena’s reportedly alright with being a single mother, telling friends that it was ‘meant to be’.

Plus, she’s reportedly turned to religion after getting out of rehab, and she has her ‘pregnancy’ to thank for that. Apparently, her new outlook on life has come from this surprising news, and she wouldn’t take it back for anything. Of course, the source adds that Selena’s already told Justin the big news, but she’s also told him that she doesn’t need him to help her – and he, like the douchebag that he is, agreed.

In Touch’s cover also has a feature on Eddie Cibrian and LeAnn Rimes, claiming that Eddie doesn’t want another kid despite LeAnn’s desperate attempts to get pregnant again. Of course he doesn’t – he’s months away from ditching that woman, and having a kid with her would only force him to stay longer.

Then, there’s another feature on the story of the week – Jay-Z‘s fight with Solange, and what exactly initiated Solange’s elevator attack on her sister’s husband. At this point, we probably have about twenty different conspiracy theories on the cause of the fight, but one thing’s for sure: all is not well in the Beyonce – Solange household.