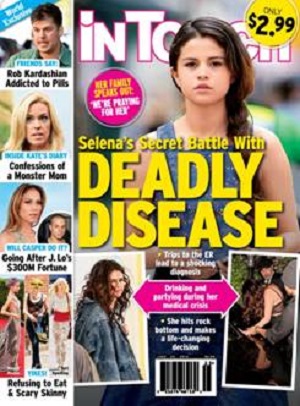 Has Selena Gomez finally come to her senses? Is she done circling the bottom of the drain with the likes of Justin Bieber and is she finally really committed to pulling herself and her life together? Supposedly, that’s now the case, especially after being diagnosed with a serious medical issue. According to the June 23rd print edition of In Touch magazine, Selena ignored her health and partied her way through symptoms until her body completely shut down, leaving her no choice but to slow down. She returned from a “spiritual journey” recently and is supposedly more devoted to taking better care of herself.

Speaking of addictions, those close to Rob Kardashian claim that on top of his food addiction he has also developed a nasty little pill-popping habit that is to blame for some of his recent erratic behavior. Will cutting ties with his fame hungry family be the right move to help Rob get himself back together? In Touch takes a look at his life as of now and what steps he needs to take to recover.

Someone who may never recover in the pool of public opinion is Kate Gosselin. Remember that scandalous book that was pulled from shelves two days after its release thanks to Kate’s attorney’s a few years back? Well, this thing is based on Kate’s personal diaries from a stolen hard drive and it’s set for re-release shortly. In Touch gives readers an advanced look at Kate’s own documentation of allegedly abusing her kids! Do you think that this will be the end of Kate’s ability to famewhore her kids out in order to keep paying the bills? Will this book’s allegation’s destroy the reality star?