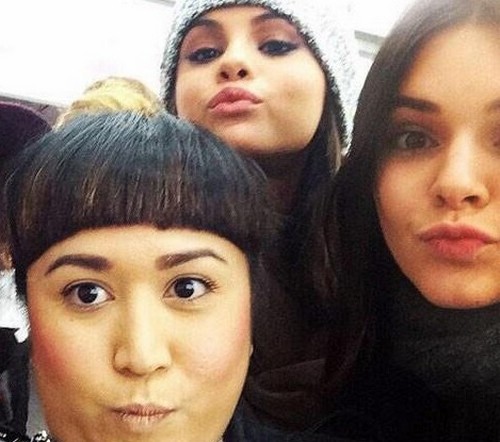 What in the world is going on with Selena Gomez? That can actually be a game, for all the good guessing at her motives can do. Selena’s on-again/off-again boyfriend Justin Bieber reportedly cheated on her with Kendall Jenner a few weeks ago, and here is Selena, posing for a selfie with Kendall, celebrating her birthday with her, and even singing Happy Birthday! Is this a case of keeping your friends close, but your enemies closer? Or has Selena Gomez become so desperate for a career boost that she’s willing to acquire Kris Jenner as a manager? In either case it makes Selena appear desperate and sad, especially after Kendall and Kylie dissed Selena hard this Summer. Apparently crow is a favorite dish of Selena’s!

I guess it wouldn’t be that shocking – Kendall Jenner is gaining a lot of ground on that whole model front, and I wouldn’t be surprised to see her getting offered film roles pretty soon. Kendall Jenner is managing where all her sisters failed – turning into a legitimate celebrity that’s doing something in her career, not just wandering around and getting photographed doing it. In fact, I’d say Kendall even had more of a career than Selena these days, a fact that has clearly not escaped Selena.

Is she swallowing her pride and staying friends with Kendall in an effort to get close to having Kris as a manager? Because she’s clearly forgiven Kendall for all the drama that went down at Coachella earlier this year, not to mention the whole cheating thing. Plus, we’d heard that Kendall Jenner and Kylie Jenner often diss Selena Gomez behind her back, but is that something Selena knows about? Because I don’t think anyone who knows Selena would say that her head is in the right place these days, especially in terms of her choosing her friends and her love life.

Basically, Selena Gomez is still in the throes of her quarter life crisis, but she better get her shit together if she wants any hope of sustaining her career in the long run. Even if that means swallowing her pride and going under Kris Jenner’s managerial wing.

What do you guys think of this Kendall Jenner/Selena Gomez friendship? Let us know your thoughts in the comments below.

Check out the pics – especially Kim Kardashian looking like an alien freak with bleached eyebrows!