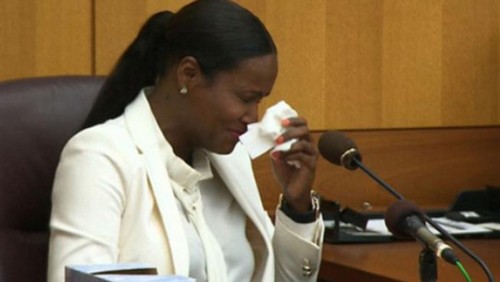 Uh oh. It looks like one of the stars of VH1’s new reality series Atlanta Exes is already an “ex-cast member” after only two weeks of shooting. Tameka Raymond, ex-wife of international R & B crooner Usher Raymond, is said to have abruptly quit the show during taping this past weekend in Atlanta. The whispers of what happened, if true, do not paint a pretty picture either. It is safe to say this was not an amicable parting of ways for Tameka and VH1, it will be interesting to see how this all pans out.

The premiere of “Atlanta Exes” was announced on VH1’s blog January 29th:

This summer, VH1′s “Hollywood Exes” sorority will charter a new chapter in ‘The ATL’ with the premiere of “Atlanta Exes.” As the thriving music and entertainment capital of the South, Atlanta provides the ideal backdrop and group of ex-wives for the franchise’s extension. The cast, featuring the once significant others of an elite list of A-list men, has no shortage of fabulousness, ambition, love, and drama. “Atlanta Exes” stars Tameka Raymond, who once enjoyed the perks and privileges that come with being married to an international music superstar, and now dedicates much of her time to the charitable foundation she started in memory of her late son Kile, interior designer to the stars Christina Johnson (ex-wife of Cee-Lo Green), and author and businesswoman Monyetta Shaw (ex-fiancé of Ne-Yo), who is busy penning a children’s book series based on the lively personality of her toddler. Also starring are entrepreneur Sheree Buchanan (ex-wife of former pro football player Ray Buchanan), who co-owns a dessert catering company and also has a business that specializes in creating custom bedazzled hookah pipes, and actress, comedian, and producer Torrei Hart (ex-wife of Kevin Hart).

It all sounded well and good, but VH1 may have over-delivered on the promise to have “no shortage of drama.” Tameka organized an event-like sale where proceeds all went to Kile’s World Foundation, an organization she started to honor her deceased son. VH1 was in the building and had the cameras rolling. Popular Atlanta blogger ATLIEN was also in the building and she gave a firsthand report:

Needless to say, I caught wind of drama on deck as soon as I pulled up on the scene as I spotted Tameka and DJ Traci Steele (formerly of Love & Hip Hop Atlanta) going at at!… The Atlanta DJ has been hanging out with Torrei Hart on the set of ‘Atlanta Exes’ and it seems that Hart and Raymond haven’t ‘bonded’ as expected. Steele (who knows Raymond) decided to be the ‘glue’ that could possibly hold the two ‘reality show’ newbies together…With camera’s rolling, Steele immediately ‘Turned UP’ for the show and acted out at the event in front of several surprised customers…From what I’ve heard, Traci came into the store yelling and screaming at Tameka asking why she didn’t like Torrei and blah blah blah. Tameka could be heard stating, ‘this isn’t the place for this’ and Traci continued to press the issue… When I pulled up, I spotted the three women walking out of the store where the argument continued outside…Tameka was apparently upset that the women would go so far as to bring the drama to something that was being held to honor her son and I’ve HEARD that Raymond submitted her resignation shortly after Traci showed up and showed out.

Apparently DJ Traci confirmed all this with a tweet, “@vh1 I’m making cast members quit” with the hash tags #beast and #everybodyaintcutoutforthis following it. So now you got to wonder, how much did VH1 producers know about this? Did they expect the ladies to fight? It would be nice to find out they had no idea but in all likelihood they knew what was really up and about to go down. It is downright shameful that this fiasco stole the attention away from the memory of Tameka’s late son Kile. I know its reality television and that this is what Tameka signed up for, but this seems to cross the line.

There has been no official word from VH1 or Tameka Raymond and it is not clear what all this will mean in regard to any contractual obligations between the parties. Whatever the case, the whole thing is just plain messy. It is distasteful. There is no business like show business indeed. This load stinks to us, what does it smell like to you? Let us know in the comments below.