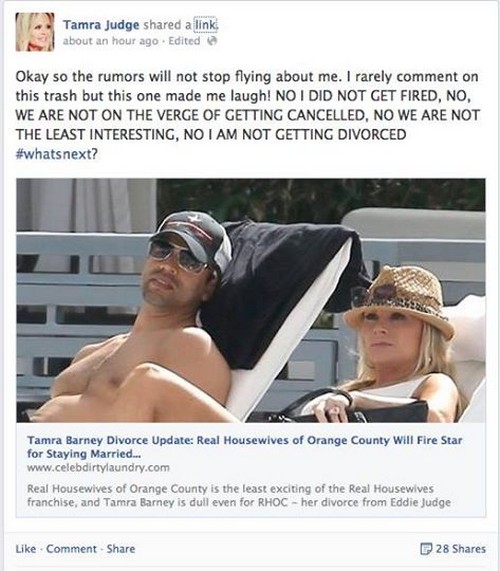 There are some major Real Housewives casting shake-ups occurring right now at Bravo. Apart from the popular sentiment that Tamra Barney should be fired, Real Housewives of Orange County spoilers reveal that Terry Dubrow (of Botched fame) is refusing to film anymore for RHOC because he is upset with how the network edited his scenes and made him appear. There is a good chance that Dubrow’s wife Heather will walk as well, and she even mentioned turning in her Real Housewives badge in a recent blog post.

The real question on RHOC fans’ minds is will Tamra Barney be fired? While rumors have swirled for months that Bravo is firing Tamra Barney, nothing has been made official. In a recent interview, Terry Dubrow claimed that Bravo will never fire Tamra Barney from Real Housewives of Orange County because she is “too real,” and “speaks her mind.” But Bravo’s recent actions suggest otherwise. The network recently fired Real Housewives of New York’s Aviva Drescher (who is infamous for throwing a temper tantrum and chucking her prosthetic leg) and they demoted RHONY trouble maker Ramona Singer from housewife to “friend,” and she will just appear in a handful of episodes next season.

If you asked anyone last week if Ramona or Aviva would be fired, the answer would have probably been “no.” Sure, fans despise them and all they do is cause drama, but it’s good for ratings so Bravo will most likely want to keep them around. But  the fact that the RHONY drama queens were axed further supports the rumors that Tamra Barney will be fired as well.

Tamra is basically the Ramona Singer of Real Housewives of Orange County, minus the crazy eyes. The fact that Bravo is revamping the RHONY cast should have Tamra shaking in her boots, because according to the writings on the wall, she is next. Especially since Bravo is already shopping around to replace the Dubrows; maybe they will come across someone to replace Tamra as well.

What did you think of Bravo firing Aviva Drescher and Ramona Singer? Do you think Tamra Barney is next to be fired? Do you agree with Terry Dubrow that Tamra is “too real” to fire? Let us know what you think in the comments below and don’t forget to check CDL for all of your Real Housewives of Orange County spoilers and news.