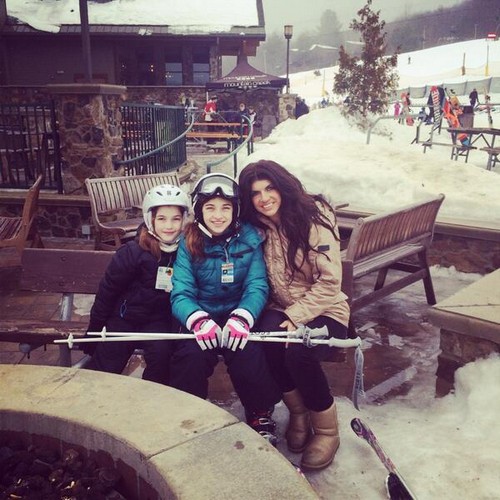 The Real Housewives of New Jersey’s Teresa Giudice is always looking for a way to make fast cash and in spite of insisting upon her own innocence she does realize that her hubby, Joe Giudice is probably looking at a long prison sentence. If she somehow escapes a similar fate then her best case scenario is that she’ll be left to raise four kids alone. Teresa is smart and realizes that her other business ventures have tanked recently, but talking on the record about her husband’s bad business schemes and general shadiness will easily get her a book deal.

According to the March 3rd print edition of Life & Style magazine Teresa’s last few cook books have tanked but she knows that if she’s willing to write a tell all it would likely fly off the shelves. It would also mean television interviews, print interviews and the more press she gets, the more cash she can pocket. Would Teresa be willing to sell Joe out once he is safely locked behind bars or better yet, deported back to Italy? You betcha.

Teresa will do whatever it takes to make money to afford herself the lifestyle that she is used to. Fans of RHONJ already know that Teresa seems to be capable of pretty much anything and has no problem selling friends and family out for the perceived greater good. I guess the biggest question here is whether or not Teresa will escape jail time herself. Do you think she’ll manage that or will she be sitting in a cell for awhile herself? Tell us your thoughts in the comments below!