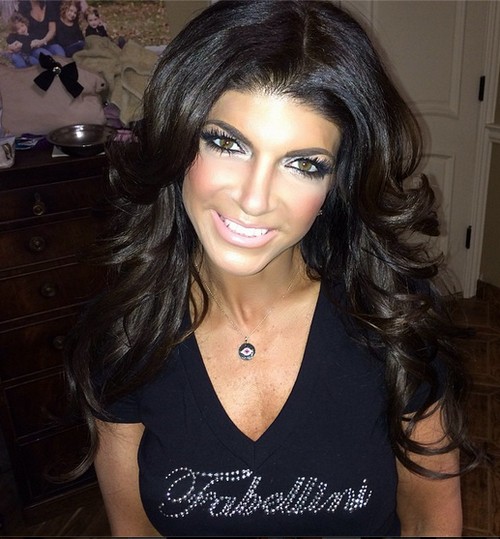 Real Housewives of New Jersey’s allegedly pregnant Teresa Giudice and her husband Joe Giudice are awaiting their fateful sentencing on October 2nd, for multiple counts of fraud. Legal professionals have all offered their two cents on the matter, and the gravity of the situation is, Teresa Giudice could go to jail for up to thirty-five years, and Joe Giudice could even be deported after years in prison, away from his family! But, Teresa is confident that she won’t be going to prison and has told anyone who will listen that she is going to get a slap on the wrist and house arrest.

Teresa Giudice’s freedom isn’t the only thing hanging in the balance these days, rumor has it Bravo is planning to fire her after this season of Real Housewives of New Jersey, and she will lose her only legitimate income. Bravo has pushed Teresa’s trial from day one on the reality show, but it seems to be hurting ratings more than it is helping them. Who would have thought – apparently Americans don’t like to watch slimy bankrupt scam artists flaunt houses, jewelry, $2000 purses, and cars that they basically stole? Especially galling is that Tre shows no remorse, none whatsoever. This salmon-lipped insult to all tax-paying Americans doesn’t think that she did anything wrong. Teresa’s only regret is that she got caught.

But, the tiny two percent of RHONJ viewers who are actually fans of Teresa Giudice, have no fear. The scam artist turned comeback queen has already set in to motion a plan to secure her a spot on the next season of Real Housewives of New Jersey and save her from prison time. According to a bold cover of In Touch Magazine, Teresa Giudice is apparently pregnant with baby number five, and her lawyer is already working hard to get her a lesser sentence since she is sporting a baby bump.

Sources have confirmed that Teresa has set in to motion divorce proceedings, and the papers will be finalized as soon as she and Joe are officially sentenced on October 2nd. Teresa is hoping to rebuild her image by divorcing Joe Giudice and putting some distant between herself and her hubby, and Bravo is already salivating over the new storyline. Nobody wanted to see crooked Teresa Giudice, so they think that portraying her as a victim, and single mom of five children on house arrest will give the reality TV show the ratings boost it needs.

So RHONJ fans, do you think Teresa Giudice will go to prison? Is she really pregnant and will that help her case at all? What about her divorcing Joe to save her job at Real Housewives of New Jersey? Let us know what you think in the comments below!

Update: Our sources are reporting that Teresa will not divorce Joe right away – in fact she won’t leave her husband until contact talks for the next season of RHONJ open up. Then the desperate housewife (!) will offer to file for divorce from Joe as long as Bravo makes her a ‘juicy’ offer (!!) – of course all of this is contingent on Tre getting her hoped-for house arrest and not prison, because if she is jailed she won’t be available for filming Real Housewives of New Jersey, will she?