The Bold and the Beautiful Spoilers June: Darla’s Ghost Meets Aly To Deal With Oliver Issues – Is He Using Her? 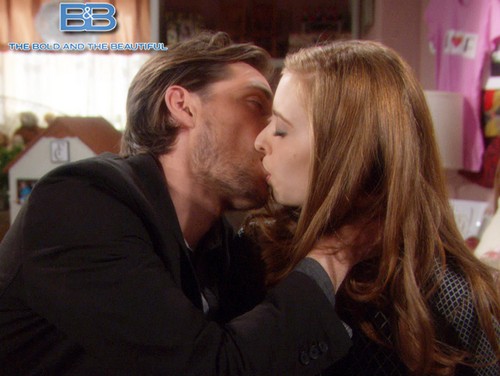 With all of the drama on The Bold and the Beautiful surrounding Brooke and Bill’s wedding in Dubai, Aly Forrester and her boyfriend Oliver seemed to have been put on the back-burner on the CBS soap opera. According to Bold and the Beautiful spoilers, Aly will be back and just as crazy as before. Aside from the axe-wielding incident with Taylor (which honestly I think a sane person would have that reaction to the person that killed their mother), Aly Forrester seemed to be reigning in the crazy train and maturing since she began dating Oliver.

However, according to the June 16th edition of CBS Soaps In Depth, Aly Forrester is still very much as crazy as she was before, and will be talking to her dead mother’s ghost again this summer. The magazine goes on to say, “Schae Harrison’s Darla will continue to serve as an important sounding board for her daughter on Bold and the Beautiful.”

So, despite how much progress Aly appears to be making on the soap opera, she will still be talking to her mother’s creepy floating ghost head this Summer. Aly seems to be in a good place now, the fact that she backtracks and begins seeking advice and comfort from her dead mother Darla makes us wonder if her relationship with Oliver crashes and burns. Or, maybe she realizes what fans have been wondering all along, Oliver may be using her to for her lavish lifestyles and to secure a job at Forrester Creations?

I think we can all agree that if Darla is going to keep returning to B&B, they need to come up with a better ghost look than just her head floating in a cloud, because it’s weird! What do you think Bold and the Beautiful fans? Do you enjoy watching Aly’s crazy alter ego, or are you over it? What about her relationship with Oliver, do you think it is the real deal? Share your thoughts and theories in the comment section below and don’t forget to check CDL tomorrow for more Bold and the Beautiful spoilers.