The Bold and the Beautiful Spoilers: Learning Darla’s Death Details Cause Aly To Break-Up Thorne and Taylor

BY Amanda Austin on May 13, 2014 | Comments: 9 comments
Related : Soap Opera, Spoiler, Television, The Bold and the Beautiful 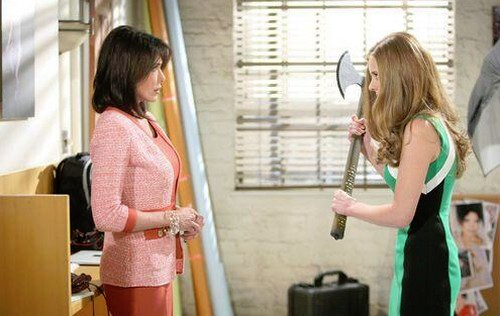 Soap opera fans are in for an intense week of drama on The Bold and the Beautiful. Spoilers for B&B teased for months that there were going to be fireworks when Aly came face to face with Taylor this month, but we had no idea Taylor (Hunter Tylo) would be sleeping with her Dad Thorne or that there would be an axe involved!

May 12 on The Bold and the Beautiful we finally got to see the fireworks we had been promised, and Aly went up one side of Taylor and down the other and even forbade her father Thorne from sleeping with Taylor, and Taylor was shocked when he agreed to the terms his unhinged daughter set before him. Aly may be a little on the crazy side, but in all seriousness- who would be okay with their father dating the woman that killed their mother?

According to B&B spoilers, Aly isn’t done with Taylor though. Tomorrow on Bold and the Beautiful Aly will force Taylor to recount every single detail of what happened the night Taylor killed her mother Darla in a hit and run car accident. So, get your tissues B&B fans, because we are in for a seriously intense and dramatic couple of episodes.

The Bold and the Beautiful spoilers also tease that after Taylor describes in detail the night that she killed Darla, Thorne sees “something surprising happen between Aly and Taylor.” So, either Aly and Taylor hug it out after she finishes describing the night she killed her mother, or Aly flies off the handle again and does something crazy. Perhaps she gets her axe again?

People are not thrilled with the storylines lately on B&B – finding them predictable:

unless aly does something drastic to taylor the b&b’s may sweeps is horrible……………none of the story lines are really that interesting just predictable………………….

These days most fans on Soap Opera Spy are finding GH and Days to be more riveting than either Y&R or B&B. What’s your opinion?