The Bold and the Beautiful Spoilers: Hope Throws Liam and Wyatt Out Of Bed – Dates Both and Takes A Page From Brooke’s Playbook 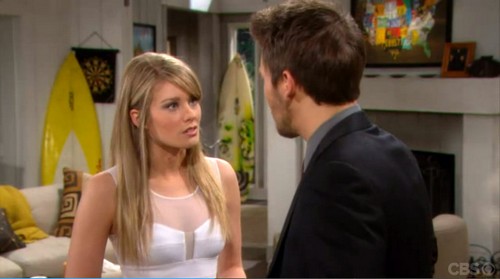 Here we go again, it’s back on the merry-go-round for The Bold and the Beautiful’s Hope and Liam. This time around though he is approaching her in a very different way. Instead of playing second fiddle to her boyfriend Wyatt (and his half-brother), Liam puts his cards on the table and pretty much told Hope to either choose to be together or choose to let him move on. He suggests that Hope can date both him and Wyatt for a bit but that once she tells him it’s over then he is going to do his best to shut the door and move on. And, in a shocking twist Hope actually accepted his proposal and informed Wyatt they can’t have sex anymore because she is dating him and his brother Liam. Ouch!

According to the May 5th print edition of Soap Opera Digest Wyatt has a bad reaction to the whole situation because the one on the outside of a triangle has the most power. When Liam and Hope were engaged and Wyatt intruded, he had control. Now that power position seems to have been handed to Liam it is infuriating Wyatt because he realizes that he has completely lost the upper hand that he once had in the situation. Wyatt is now on the receiving end of the position he put Liam in when he made a move on Hope.

How long can Hope really date Wyatt and Liam though, before it all blows up in her face? Today on B&B she claimed that she never wanted to be in this position and she never wanted to be like her mother Brooke Logan and be in a relationship with more than one man. It looks like she has become exactly like her mother Brooke though, and either the writers are desperately trying to replace the aging Brooke character, or they are a one trick pony – and only know how to create drama via love triangles between two brothers.

Regardless of why the writers are dragging out this love triangle, who do you think that Hope actually belongs with? Is this new and improved Liam actually now a great match for her or should she continue to see Wyatt exclusively? He is the one in this triangle that suddenly has everything to lose. Tell us your thoughts in the comments below! And, don’t forget to check CDL tomorrow for more Bold and the Beautiful spoilers and speculation.

Some quotes and comments on today’s, April 28, show:

Hope to Wyatt, “I watched my Mom ping pong men around and I never thought I would be like that but I am in love with 2 men. I promise I won’t drag this out, it won’t take long.”

Those writers are demented! And definitely need stop with wife swap.

I hope that hope picks the right guy this time and Marry’s him! LIAM!!!!

If Steffy isn’t coming back bring someone new in. Bring in someone georgous & give her to Liam. Hope, get over yourself and move on.

Wonder why Steffi is still in opening credits if she’s not coming back?

I love Hope and Liam together! And Wyatt should take a hike! Lol Steffy has moved on, not coming back on the show! I don’t miss her! Lol

Hope and Wyatt are a better match,and Steffy and Liam

Well there you have a sampling of what fans on Soap Opera Spy think of this endless love triangle!