The Bold and the Beautiful Spoilers: Hope’s Pregnancy Test – Pregnant With Wyatt’s Baby – Liam Demands Proof – Will This Put Aly Forrester Over the Edge? 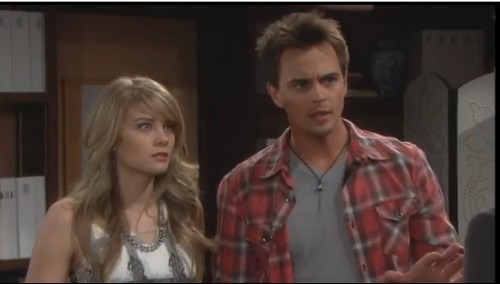 It has been quite a while since an unplanned pregnancy rocked The Bold and the Beautiful spoilers so the popular CBS day time drama was about due for a bun in the over. Today on B&B Hope confessed to her boyfriend Wyatt that she was “late,” and thought she may be pregnant. Now, before we all get worked up it should probably be mentioned that she hasn’t actually taken a test so there is a small chance Bold and the Beautiful fans are getting worked up for nothing. But, considering the amount of times we have seen her and Wyatt hooking up on screen, the odds are not in their favor.

Wyatt and Hope are consenting adults who seem to have their lives pretty much together, so having a baby wouldn’t be a horrible thing. However, they aren’t married, and that is a huge deal considering Hope created Hope For The Future. She is an advocate for young girls, and the Hope For The Future message encourages young women to wait until they are married to have sex. How is she going to explain to all of the girls that look up to her that she not only had sex before she got married, but is pregnant and still not married? This scandal is going to do some serious damage to the Hope For The Future brand and Forrester Creations.

Aly Forrester recently lashed out against Wyatt and Hope. She blames Wyatt for taking advantage of Hope and blames Hope for abandoning her Hope For The Future brand and basically not practicing what she is preaching. Aly has already slapped Wyatt and tried to fire him when she found out that he and Hope were having sex, there is no telling what Aly will do if she finds out that Wyatt  got Hope pregnant.

Here is what Soap Opera Spy fans of The Bold and the Beautiful think about the latest shocking reveal:

Love the idea of Hope-Wyatt eloping & having a baby. After all, Hope had the big wedding with Liam. That would get her off limits to Liam. Yes do it.

I wish it was Liam’s can’t stand Wyatt, but I don’t think she was ever intimate with Liam!

I kind of figured this would happen! I don’t think she and Liam were “together” about the same time, were they? I mean, DNA tests could be inconclusive about who the daddy would be I would imagine.

As you can see above the aficionados are split over Hope’s love life – some prefer her with Wyatt but others favor Liam. Still, there’s many a slip between the cup and lip so let’s see how things turn out.

Friday, April 11, there was an update on Hope’s pregnancy situation and a related conflict between Wyatt and Liam: after Liam learns that Hope has bought a pregnancy test he rushes to confront her. Liam demands to know if Hope is pregnant because he is convinced that it is he who belongs with her and not Wyatt.  Hope tells him she hasn’t yet taken the pregnancy test while Wyatt rants that it is no concern of Liam’s. Hope leaves the room to take the pregnancy test and re-enters… and of course the week ends right there without us learning the results of her self-administered pregnancy test.

What do the fans think?

I’m betting on Wyatt, don’t like Hope with Liam . But the part of the episode that was totally disgusting was Bill kissing Brooke. Totally gross, fast forward for sure.

Predictable cliff hanger for the weekend. Why would you let your ex boyfriend find out the results at the exact same time you tell the father of the baby. She still loves Liam!

I think it’s time for Hope to put Liam in his place for good!

Truly it seems to be a standoff among fans between Liam and Wyatt – I’m old-fashioned and therefore hope that Hope is NOT pregnant!

Are you excited that Wyatt and Hope may be having a baby? Or are you still hoping that she will get back together with Wyatt’s half-brother Liam? Are you dreading it? What about her wholesome commercial image for Forrester Creations? Do you think Hope and Wyatt will run off and get married so that she isn’t technically having a baby out of wedlock? Is this enough to finally send poor Aly over the edge. Share your thoughts and theories in the comment section below and don’t forget to check CDL tomorrow for more Bold and the Beautiful spoilers.