The Bold and the Beautiful Spoilers: Aly Fights Wyatt’s Push To Exploit Hope’s Sexuality – Whose Side Will The Forresters Take? 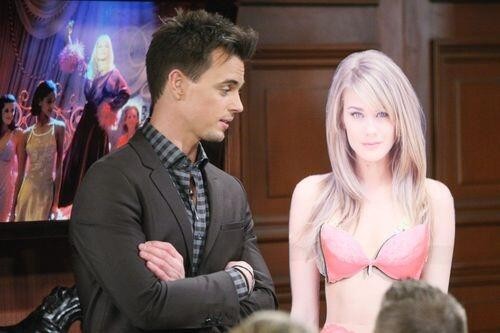 The battle lines have been drawn between Aly Forrester and Wyatt Fuller on The Bold and the Beautiful, and it is anyone’s guess who will come out on top this week. Aly has had it out for Wyatt since Hope and Wyatt travelled to Paris and she caught them in bed together. Although Aly is just supposed to be an intern at Forrester Creations, she even tried to fire Wyatt, after she slapped him. Last week she tried to expose his involvement in the Hope Diamond theft, and that plan backfired as well. Wyatt is fighting back now though. They are both determined to get each other kicked out of the Forrester’s company.

Today on Bold and the Beautiful Wyatt pitched a lingerie line called “Hope’s Bedroom” to Eric, Rick, and the rest of the Forrester team. Everyone seemed to be on board with the idea to make Hope’s line “more sexy,” except for Aly. She thinks that smearing billboards with photos of Hope in her underwear is trashy, and a desperate attempt to use her body to promote the company. At the meeting Aly protested the lingerie line and told Hope, “You don’t have to cheapen yourself this way.”

Wyatt fought Aly’s fire with fire though. She may be trying to get him and his mother Quinn kicked out of Forrester’s Creations, but Wyatt is done putting up with her and is campaigning to get her ousted from the company. Wyatt asked Aly’s own family to make her leave the meeting, “This company cannot be run by a teenager. Aly is supposed to be a shadow and silent. I respectfully ask that Aly be removed from this meeting.“

She’s crazy and they know it. Why are they treating her like nothings happening

I loved this scene! Aly is clearly a sicko and grandad just sits there. Come on Eric, put her in treatment before she physically hurts someone.

Asking Aly’s own family to kick her out of a meeting is a bold move, and will only make Aly more furious. But, considering her behavior as of late, Wyatt might just get his way. Do you think the Forrester family will side with Wyatt and kick Aly out? Or, will they turn a blind eye to Aly’s behavior and allow her to keep up her shenanigans simply because she is a Forrester? Share your thoughts and theories in the comment section below.