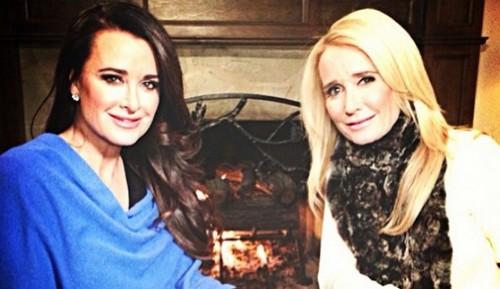 It’s going to be a rich women’s donnybrook on The Real Housewives of Beverly Hills season 5 premiere if rumors of Kyle and Kim Richards screaming crying fight are anything to go by. According to insiders, Season 5 of The Real Housewives of Beverly Hills will be the craziest and most violent it’s ever been. So in other words, the sky is blue, the grass is green, and the world is round. They always say that each season of the Real Housewives is crazier than the last, and they’re usually right. But at this point, we know that a lot of is amateur and staged theatrics, so it’s almost amusing to watch the housewives try to one-up each other on their lunatic antics.

An insider [probably Bravo’s PR people] even told Life & Style, “The drama and violence are off the charts. The women have done nothing but fight every time they are together. And when they aren’t all together, they all talk behind each other’s backs.”

Apparently, Kyle Richards is the biggest instigator of the drama on The Real Housewives of Beverly Hills this time around. The source adds, “She and her sister, Kim, are really not getting along, and she’s fighting with Brandi Glanville, Lisa Vanderpump and Lisa Rinna as well. It’s gotten so bad that the women say they don’t want to return for another season.”

HA! Don’t want to return for another season, my foot. These women would rather eat their firstborn than give up their spots in The Real Housewives franchise. For most [if not all] of them, their sole claim to fame continues to be the fact that they are Real Housewives, and it’s their biggest income source as well. Why would they give up their claim to fame over some manufactured drama? Not getting along with each other is just a regular day at work for them, and they’re used to it by now.