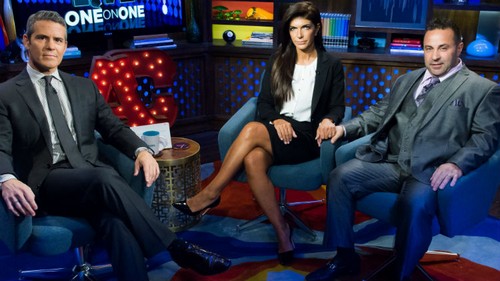 The Real Housewives of New Jersey Season 6 Reunion Part 1 Spoilers reveal that the much awaited reunion show will kick off on Bravo tonight, Sunday November 2. Host Andy Cohen will of course touch on RHONJ issues like Teresa Aprea’s hubby’s alleged affair, and the never-ending feud between Jacqueline Laurita and Dina Manzo, but we’re all pretty much aware that the majority of the show will revolve around Teresa Giudice’s and Joe Giudice’s recent court case and prison sentences.

Andy Cohen has been working along side the Giudice’s for years now, and knows the family better than any RHONJ fans at home. In a recent interview Andy Cohen discussed how her was crying and how hard it was for him to interview Teresa and Joe Giudice during the Real Housewives of New Jersey Season 6 reunion show, because he is so devastated that they were found guilty and going to prison. Andy even announced in a recent interview that he plans on visiting Teresa Giudice while she is in prison, serving her 15 month sentence.

Seriously? Now, Andy Cohen and Teresa Giudice are BFF’s? Weren’t they just feuding? Teresa Giudice has been complaining to anyone who will listen that Andy Cohen and Bravo are exploiting her family and using their court case to make money and improve ratings. With all of these fake tears and a sudden love for the Giudice Family, Andy Cohen is just proving that he is as fake as the housewives he commandeers.

What do you think RHONJ fans? Do you believe that Andy Cohen is Teresa’s BFF – and will visit her in prison? What do you think of his fake tears for the reunion show? Let us know what you think in the comments below and don’t forget to check CDL tomorrow for more Real Housewives of New Jersey spoilers and news.