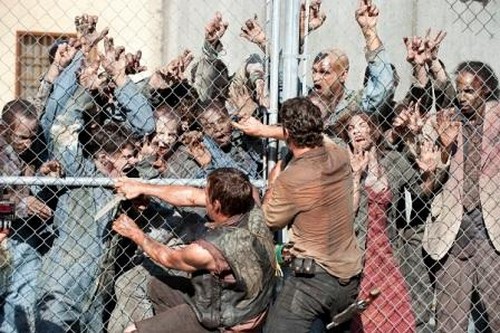 The Walking Dead season 5 spoilers continue to inform and entertain. We’ve seen all sorts of weapons on The Walking Dead. Well, not always weapons, but lots of things used to kill zombies. Hey, they work, right? That’s all that matters. In the event of a real zombie apocalypse, you may not have access to real weapons like guns and kitanas and crossbows. After all, where do the survivors on The Walking Dead keep getting ammunition for their guns? Hmmm, something to think about.

Flat screen televisions are great, but for killing a zombie, you need one of those old-fashioned ones with the big picture tubes in them. Chuck a little 19-inch TV at that zombie (make sure you hit him in the head!) and you can bet that he will have a bad day.

It’s a great trick no matter how many times we’ve seen it in the cartoons. Death by piano is an awesome way to kill zombies but it takes some preparation and planning. You can’t use this one during a random encounter with the undead. You have to schedule it. You just need a two-story building, a piano (look for a grand piano for greater effect), a rope or two and some pulley things and maybe a friend or two to help make it all work. The details aren’t that important but what IS important is the drop. Time everything perfectly for that zombie (or heck, take out three or four if you use a grand piano) and revel is the wreckage when you drop that piano on a zombie or four. The downside is that you or one of your buddies will have to act as bait, but it’ll be fine.

Are there any working steam rollers available during the zombie apocalypse? We haven’t really seen any so far in “The Walking Dead,” but they must be out there. There was surely some road construction going on somewhere when the apocalypse came down. Imagine the great satisfaction of rolling out zombies like cookie dough!

Who doesn’t want to see a zombie brain impaled by a gigantic icicle? It’s “Frozen” meets The Walking Dead! Maybe it doesn’t get cold enough in Georgia to create deadly icicles, but hey this is television. Throw in a freak snowstorm and some serious ice and there ya go!

We’ve seen plenty of arrow kills, gun kills, and other zombie deaths, how about something more creative? Just one of these will be great and the ratings will go through the roof! The Walking Dead season 5 spoilers return tomorrow so come back to CDL for more fun and news!