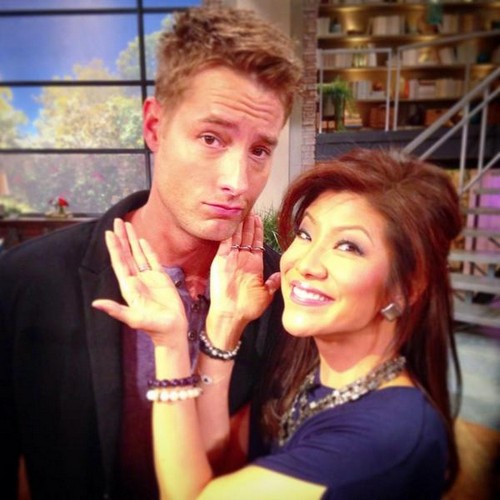 The Young and the Restless spoilers for the week of 3 reveal that Y&R fans will not want to miss a single drama-filled episode of the CBS soap. Y&R spoilers tease a shocking revelation will be made about Summer’s paternity, rumor has Nick and Sharon’s wedding is interrupted… again, and Justin Hartley makes his debut as Adam Newman.

Monday November 3: The Young and the Restless spoilers for November 3 reveals that moments before Nick and Sharon’s wedding, Phyllis basically kidnaps the bride, and takes Sharon to the stairs where Phyllis fell and wound up in a coma. Meanwhile across town, Victor Newman makes the shocking realization that Sharon is hiding the fact that Nick is Summer’s father.

Tuesday November 4: The love triangle between Devon, Hilary, and Neil has raged on for months now. But, according to The Young and the Restless spoilers, on November 4th Hilary and Devon’s affair will finally be exposed. And, rumor has it that Hilary really might be pregnant with one of her lovers’ babies. While all hell is breaking loose in the Winters Family, across town Avery’s ex Joe Clarke shares an intense confrontation with Dylan McAvoy.

Wednesday November 5: The Young and the Restless spoilers have been teasing for months now that Adam Newman is still alive and will be returning to Genoa City. According to Y&R spoilers, Muhney’s replacement Justin Hartley will make his big debut on Wednesday November 5th. Ironically, the same day that Justin Hartley arrives on the CBS soap, Adam’s wife Chelsea receives a mysterious gift.

Thursday November 6: Over the course of the last few weeks it really seemed like Victoria and Stitch might be on the road to reconciliation. But, in a shocked twist – Y&R spoilers tease that Victoria reaches out to Billy and implies that she wants to get back together with him on November 6th, not Stitch. We’re hoping this is just Victoria’s hormones talking, because she seems to change her mind about who she wants to be with more often than most women change their underwear.

Friday November 7: When The Young and the Restless rumors began circulating that Michael Baldwin had cancer, fans of the CBS soap didn’t want to believe it, and now that Michael has received his diagnosis – he doesn’t want to believe it. So, Y&R spoilers tease that on Friday’s episode Kevin corners Michael and confronts him about keeping secrets from his family, but Michael still isn’t ready to tell his wife Lauren that he has cancer.

So Y&R fans, are you as excited for the fall-out as we are now that we Sharon Newman’s secret is finally out? Is it safe to assume she and Nick won’t be getting married? Do you think Hilary is really pregnant, who is the father – Neil or Devon? Let us know what you think in the comments below and don’t forget to check CDL tomorrow for more The Young and the Restless news and spoilers.