The Young and the Restless Spoilers: No Forgiveness, Nick Takes Faith Away From Sharon – Phyllis Learns About Jack and Kelly 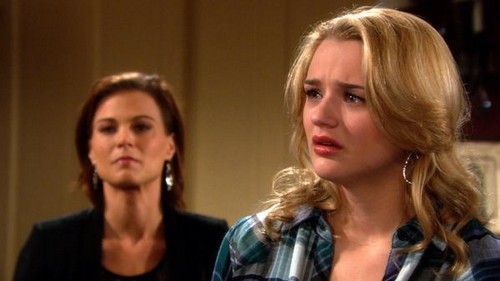 The Young and the Restless spoilers for the Friday November 7 episode of the CBS soap reveal that “Schick” (long time super couple Sharon and Nick Newman) are officially over and there will not be a reconciliation any time soon. After Nick Newman learned that Sharon had switched Summer’s (Hunter King) DNA test results and robbed him of a daughter, he promptly dumped Sharon. However, Y&R fans clung to the fact that they might eventually repair their marriage for the sake of their youngest daughter Faith – and because of the fact that Sharon was not mentally stable when the made the paternity test switch.

According to CDL’s exclusive source The Young and the Restless spoilers for Friday November 7, Nick pays Sharon a visit and informs her that they need to talk. Naturally Sharon thinks that Nick has cooled down and has come to make amends, but instead he informs Sharon (Sharon Case) he has come to pick up Faith and is taking her to live with him. Sharon is devastated, but can she really fight him on it? Considering her colorful track record she doesn’t have a leg to stand on when you compare which parent is more fit to have Faith. Nick (Joshua Morrow) does have a shred of compassion left for her though, Y&R spoilers tease that on Friday’s episode he does talk Summer out of pressing charges against Sharon for tampering with the test.

In other The Young and the Restless news – spoilers tease that Kevin spends tomorrow’s episode trying to convince Michael (Christian LeBlanc) to come clean to his wife Lauren and tell her he has cancer. Across town, Phyllis is puzzled when she finds a photo of Kelly in Jack’s desk. And, Abby continues to meddle in Victoria’s love life and tries to persuade her to skip having dinner with Stitch.

So Y&R fans, can you believe that Nick took Faith from Sharon? Was that a low blow because Nick is upset, or could Faith really have been in danger living alone with Sharon? What kind of crazy antics do you think Phyllis (Gina Tognoni) will pull when she learns that Jack was living with Kelly before she came home? Let us know what you think in the comments below and don’t forget to check CDL tomorrow for more The Young and the Restless spoilers and news.

Soap Opera Spy Facebook page readers are worked up about Y&R’s dramatic turn of events – Sharon is getting heaps of sympathy but not from everyone:

She is on medication now does anyone know people bipolar? Why blame her totally when she was not on medication and seeing a shrink!

Felt bad for Jack and Summer..

I feel sorry for Sharon, I know she did awfull things, but she was sick. I thought Nick would stand by her.

I agree, they sure made you think he was going to be a stand up guy, “no matter what her secret was”! It wasn’t like she remembered and just wouldn’t tell him. And sure enough, when he finds out, he walks!!! Not the Nick we know, but more like Victor. Why did they spend so muchtime building up his love and support for Sharon, against all her “haters”, to just have him be so mean and turn on her in an instant!!!!! Very disappointed with the story line.

I sure was hoping they would take the unexpected route and have nick be more understanding to Sharon! She didn’t rob him of his kid, she was milking having 2 rich daddy’s, she is just upset she only has one again!

If people don’t know anything about Bi Polar, you shouldn’t judge…..it is Real & not all peaches & cream dealing with someone that has Bi Polar…even being on med’s these people still get off kilter now & then….sometimes it is like these people have completely lost their mind….I wouldn’t wish Bi Polar on my worst enemy & as for as Abby goes she needs to keep her nose out of Victoria’s love life & mind her own business !!!!!

Nick is a stand up guy, but expecting him to stay with sharon after this is asinine. Nobody in their right mind would forgive this.

Nick had custody of Faith anyway. Sharon doesn’t deserve any sympathy she knew what she was doing was wrong, meds or no meds. I dont think Victoria will be with stitch bcuz adam is back….for Chelsea.

She was smart enough and sane enough to know how to change a paternity test results! There was nothing more than doing EVERY THING IN HER POWER TO GET WHAT SHE WANTED FOR HERSELF….Poor me I was sick…she’s a self centered evil witch!! It was her choice not to take meds!

It seems the audience is divided on the issue of Sharon’s culpability and Nick’s lack of forgiveness. This means that the story is being done well!