The Young and the Restless Spoilers: Victoria Delivers a Baby Girl- Gabriel is Adam’s New Identity – Jack Proposes to Phyliss 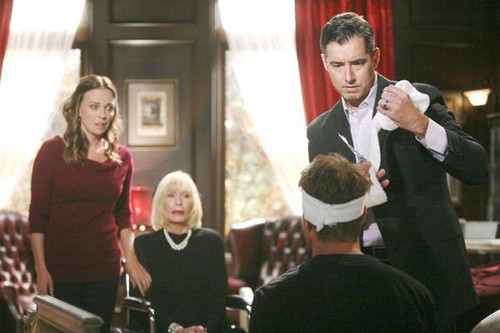 The Young and the Restless spoilers reveal that the Monday November 17 episode of the CBS soap will be a must-see for Y&R fans. The Young and the Restless spoilers have been teasing the birth of Victoria Newman’s baby for months now, and whether Stitch or Billy (Burgess Jenkins) is the father. According to CDL’s exclusive Y&R spoilers source for the Monday episode – Victoria finally gives birth, with both her potential baby-daddy’s at her side. It’s a real family affair, in the parking ramp. And…it’s a girl!

The Young and the Restless spoilers from CDL also tease that Y&R fans will get a little more insight in to Adam Newman’s relationship with Constance, and his new identity Gabriel. While Adam (Justin Hartley) is checking out his new face in the mirror on November 17, he gushes to Sage that he can’t wait to return to Genoa City because no one will know who he is – which means it will probably be another six months before anyone realizes that newbie Gabriel is actually Adam Newman.

Y&R spoilers also tease that Constance arrives and rants to Adam to eat his spinach because it was Gabriel’s favorite, and then she mentions the night of Adam’s crash and that Gabriel tried to save him. There are still some huge pieces of the Gabriel/Constance puzzle missing, but rumor has it that Constance (Sally Kellerman) may have lost her grandson Gabriel and is a little off her rocker and trying to bring him back to life via Adam, naturally Adam is on board because he needs a new identity and face.

In other The Young and the Restless news – it looks like Jack (Peter Bergman) and Kelly are kaput and Phyllis has worked her magic. On the November 17 episode of the CBS soap Jack and Phyllis (Gina Tognoni) share an emotional moment and Jack winds up willingly proposing to Phyllis this time. And, Phyllis is already planning the couple’s engagement party. Rumor has it Kelly goes crazy when she learns of the engagement, and at this point we can’t even blame her.

So Y&R fans, who do you want to be the father of Victoria’s baby – Stitch (Sean Carrigan) or Billy? What do you think about the Adam Newman AKA Gabriel mess, is he scamming Constance or is she fully aware that he is Adam Newman and not her grandson? How does Sage fit in to the equation? Are you happy Jack and Phyllis are officially back together? Or did you like him better with Kelly? Let us know what you think in the comments below and don’t forget to check CDL tomorrow for more The Young and the Restless spoilers.

What do people on Soap Opera Spy Facebook page have to say about today’s show:

I sure would love stitch to be babys daddy

I’m in Mexico.. One of the people I met LOVEs the show.. She tried to fill me on.. One pizza….one case of… Something my comfy couch and I’ll be set.. 2 weeks to catch up..

I can’t wait to see what Adam got in store for G.C

Sage knows he is not Gabriel.. They have some kind of agreement between the two of them. From what I can figure out she is supposed to help him get back to Genoa City and Connor will probably be the one to figure out Gabriel is really is daddy.

Billy needs to be the Father and Jack and Phyllis, Kelly needs to leave the show, can’t stand her!!!!!