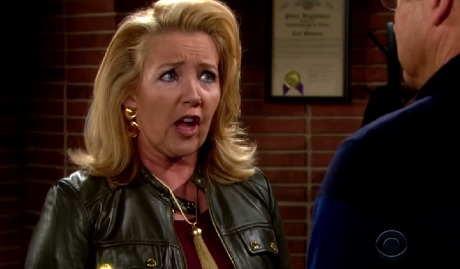 The Young and the Restless spoilers have been teasing for weeks that Nikki Newman has fallen off the wagon (again) and has been drinking her sorrows away. Somehow, the matriarch has managed to keep her drinking a secret so far, but we all knew it was only a matter of time before her friends or family began to pick up on her erratic behavior and constant slurring.

In an all new The Young and the Restless spoiler video, it looks like the inevitable has finally happened, and someone has figured out Nikki’s shameful secret. The Y&R spoilers promo of October 21 teases, “This week her dark secret could finally be exposed.” After Nikki’s new drinking partner, Maureen, barges in to a hotel room where Nikki and Paul are waiting for Ian with a bottle of vodka, Paul takes Nikki aside and demands to know if she is drinking again. Nikki scoffs, “You think I’ve fallen off the wagon?!”

The Young and the Restless spoiler video also teases some serious drama coming up for Avery and Dylan. When Dylan is released from the Genoa City slammer, he is shocked to see Avery’s ex-husband Joe Clarke roaming around town. In the Y&R promo Dylan demands, “When were you going to tell me your ex was in town.” There also appears to be a confrontation between Avery and Joe, and she asks her ex hubby, “What kind of game are you playing?”

It looks like the drama is really heating up this week on The Young and the Restless. Do you think Nikki will be able to lie her way out of this, or is Paul Williams catching on to her and her secret drinking? Is Avery and Dylan’s relationship in trouble? What do you think Joe Clarke’s master plan is? Let us know in the comment section below and don’t forget to check CDL tomorrow for more The Young and the Restless spoilers.