The Young and the Restless Spoilers: Phyllis Breaks Up Her Wedding to Jack Abbott – Ruins Her Own Marriage? 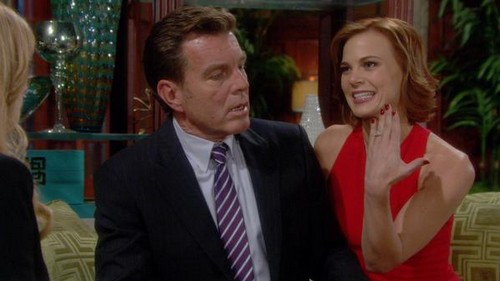 The Young and the Restless spoilers are at it again. This time they are reporting that Phyllis Newman will stop yet another Genoa City wedding ceremony. Y&R rumors warn that this time it will be her own to Jack Abbott! Ever since Phyllis has returned to Genoa City after awaking from her year long coma, no one will give her straight answers about the developments that took place during her long nap.

The Young and the Restless news is that Phyllis will take Jack Abbott all the way to the altar, but stop short of actually saying, “I do”. In recent weeks the Y&R recast Gina Tognoni as Phyllis Newman, has been making her own mark as ‘Red’ on the fine residents of Genoa City. The spit fire has broken up long time lovers Nick and Sharon wedding and relationship. Along with divulging Sharon’s secret of switching Summer, Jack, and Nick’s paternity results.

The rumors are flying that Kelly Andrews will be Phyllis’s next victim. Jack Phyllis’s fiancée, her daughter Summer, her own sister Avery or even her best friend Michael Baldwin has kept tight lipped regarding Jack and Kelly’s love affair during her absence. Phyllis took matters into her own hands by searching Jack’s phone for the information regarding Kelly and Jack’s romance. In typical Phyllis fashion, she is now gearing up plans for a quick engagement and wedding.

Looking for who else to help her but Genoa City Athletic Event Planner Kelly Andrews! Jack has basically whimed out telling Phyllis anything regarding his love affair with Kelly.  Even though Jack has had every opportunity to explain, he has chosen not to. The spoilers are also teasing that Jack will find him self all alone again. Do you agree with Phyllis’s Revenge plot?  If Phyllis and Jack spilt, who would you like to see Phyllis with?   If the Y&R nrumors is true, you will not want to miss Phyllis Newman back in action. Tune in to CDL for more The Young and the Restless spoilers!