The Young and the Restless Spoilers: Victor Learns Stitch is a Murderer and Liar From Billy – Jack Forsakes Phyllis for Kelly 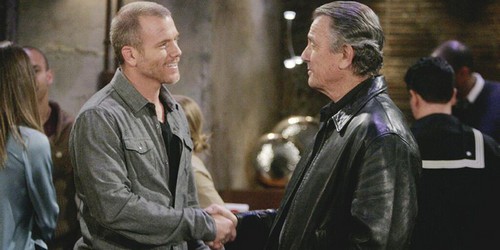 The Young and the Restless spoilers teased for months that Stitch was hiding a dark secret about his past. It was finally revealed that Stich had spent some time in prison for killing his father, which he claims was an accident. Kevin and Chelsea’s sleuthing also uncovered that Stich stole the identity of a childhood friend that passed away, and used a fake name to enlist in the army and acquire his medical degree. Stitch’s secret isn’t exactly a secret anymore, but Victor Newman has been so caught up in his own schemes, that he still has no idea his daughter Victoria might be pregnant by a murderer.

According to our exclusive CDL The Young and the Restless spoiler source, on the August 1st episode of Y&R Billy decides to tell Victor Newman all about Stitch’s secret and the fact that he lied about his name, and his medical license isn’t even legit. It’s ironic because Victor actually spent some quality time with Stitch and made it very clear that he supported Stitch’s relationship with Victoria much more than Billy’s. So, Billy can’t wait to rub it in Victor’s face that Stitch, the man he wanted his daughter to be with instead of Billy, is a convicted murderer and a liar.

It will be interesting to see how Victor reacts to the news about Stitch’s past. He could pull some strings and help Stitch out, and then use it against him later. Or, he could completely freak out and try to eliminate Stitch from Victoria’s life all together. But, that would mean he would be taking Billy’s side in the entire ordeal, and the odds of Victor taking Billy’s side, no matter the circumstances are slim to none.

The Young and the Restless spoilers for August 1st also tease that Jack makes a decision, and informs Kelly that some days he missed Phyllis, but he loves Kelly every day. So, Jack announces that he is travelling to Georgia to say good-bye to Phyllis for once and for all, so that he can be with Kelly. Y&R fans can also expect to see Jill and Colin on August 1st, and they are in a world of trouble when the goon they paid with the fake necklace realizes the necklace is a fake.

So Y&R fans, whose side do you think Victor will take after he learns about Stitch’s past? Will he still stand by Stitch, or will he actually support Billy and Victoria having a baby together? Let us know what you think in the comments below and don’t forget to check CDL tomorrow for more The Young and the Restless spoilers.