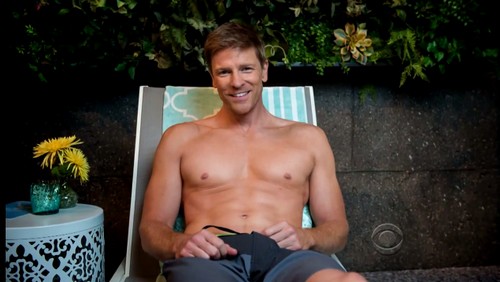 TPTB at The Young and the Restless didn’t waste any time getting David Tom’s replacement Burgess Jenkins in to the studio. It was just last month that soap fans were shocked by the news that Y&R had axed David Tom. In interviews after the casting switch-up, a bitter Tom revealed that Y&R claimed he looked “too young” for the role.

A spoiler video for the week of June 23rd was released by CBS with Jenkins already playing the part of Billy Abbott. In the video, Burgess (as Billy), has returned from Australia and is trying to win over Victoria; he pleads with her to consider taking him back. According to The Young and the Restless spoilers for the week of June 23rd, Billy is actually unsuccessful and Victoria decides to make their separation official and divorce him.

Since Billy Miller left The Young and the Restless and David Tom took over the role of Billy Abbott, Y&R fans were not pleased with his acting and didn’t hold back about their feelings on social media. For once, it looks like TPTB actually took what the fans had to say into consideration and sent David Tom packing and recast the role. This week we will learn if the grass is really greener on the other side. Burgess Jenkins has an impressive resume, but so did David Tom…there is a chance that Jenkins won’t meet everyone’s expectations and it could prove to have been a mistake to oust David Tom.

What do you think, Y&R fans? Are you happy to have Burgess Jenkins in the role of Billy Abbott, or do you think that Y&R should have stuck with David Tom? Let us know what you think in the comments below, and don’t forget to check CDL daily for more The Young and the Restless spoilers.