The Young and the Restless Spoilers: Victoria Divorces Billy Abbott and Switches to Stitch – Giant Fail for Billy’s Scheme 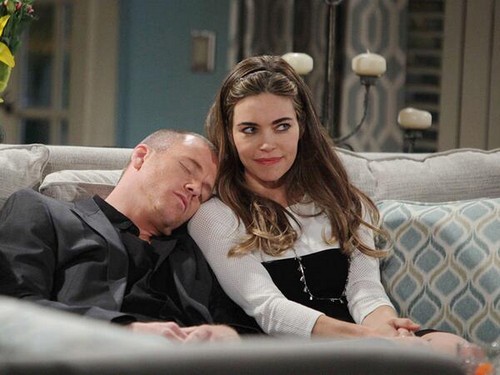 The love triangle between Billy Abbott, Stitch, and pregnant Victoria Newman has been dragging out for what seems like forever on CBS’s soap opera The Young and the Restless. According to Y&R spoilers, it is finally going to come to an end when Victoria Newman makes a shocking decision. Victoria and Billy have been separated for a few months now on The Young and the Restless, and she is currently pregnant with either Stitch or her husband Billy’s baby.

Recently on The Young and the Restless, Bill made it his mission to find out what dark secret Stitch was harboring and use it to convince Victoria to leave Stitch and reconcile with himself. Billy enlisted the help of former con-artist Chelsea Newman, and they travelled across the world to Australia to track down Stitch’s ex-wife Jenna and find out what he was hiding. Unfortunately, Jenna caught on to their rouse and refused to give them any information on her ex-hubby. So, Bill returned to Genoa City empty-handed, but still determined to win back Victoria.

According to The Young and the Restless spoilers in the June 30th edition of Soap Opera Digest, Billy’s plan actually backfires, and Victoria is so irate that he traveled all the way to Australia to try and cause a rift between her and Stitch, she demands an official divorce. The magazine teases, “After Billy shares what he learned about Stitch, Victoria accuses her husband of purposely trying to sabotage any hope of reconciliation. Head writer Shelly Altman adds, ‘Victoria explains their legal separation hasn’t convinced her they should be together, and his recent antics, going to Australia with Chelsea to dig up dirt on Stitch, was the final straw.”

So, it looks like Victoria Newman and Billy Abbott’s tumultuous relationship will finally be coming to a close on The Young and the Restless. Do you think Victoria will actually go through with the divorce, or could the paternity of her baby have an effect on whether she chooses to be with Stitch or Billy? Share your thoughts and theories in the comment section below and don’t forget to check CDL tomorrow for more The Young and the Restless spoilers.