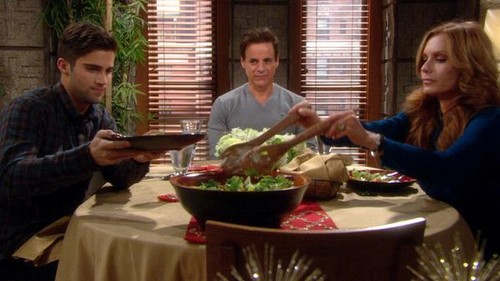 The Young and the Restless spoilers for Friday December 26 reveal an exciting day of drama and unexpected twists on the CBS soap. Victor Newman sent Tobias in to Jabot Cosmetics to steal the formula to the new potion they are working on – so you can imagine Victor’s surprise when he realizes that the files and formula that Tobias brought him are for tequila. Victor laughs that the Abbott’s are playing Tobias like a fool and orders him to stay on at Jabot and act as a decoy while he sends someone else in to actually get the job done.

Michael Baldwin seems to have a totally new outlook on life, and The Young and the Restless spoilers for December 26 tease that his first order of business as the new Michael Baldwin is to drop Joe Clark as a client. Joe isn’t thrilled, but afterwards Michael stops by the coffee shop and tells Avery and Dylan that he has dumped Joe – and they couldn’t be happier. YR spoilers tease that Michael even agrees to cover some of Avery’s workload so that she and Dylan can get away on a romantic vacation to celebrate their engagement.

In other The Young and the Restless news – Ashley Abbott has a date for New Years! Apparently, Ashley and Joe were very close when they were both living in New York and after they bump in to each other on December 26th, Joe asks Ashley to spend the holiday with him. The Young and the Restless spoilers also tease that Y&R fans can expect to see Sage and Nick Newman spending some time together, and Constance’s health takes a turn for the worse.

So, who thinks that Joe is just the second spy sent in by Victor Newman – and he is just playing Ashley? Are Nick and Sage going to wind up hooking up? Will Victor and Joe be able to go through with their project without Michael’s help? Let us know what you think in the comments below and don’t forget to check CDL tomorrow for more The Young and the Restless spoilers, polls and news.