The Young and the Restless Spoilers: Will Hilary Choose Devon or Neil – Devon Gives Her An Ultimatum 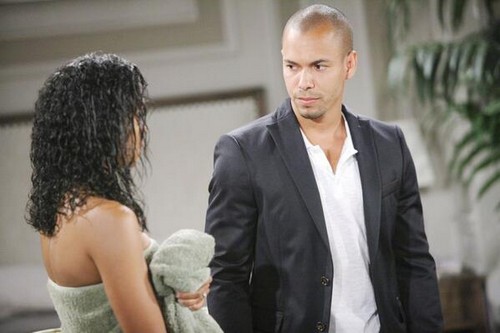 Soap operas are built from the ground up on love triangles, but the most recent triangle developing on The Young and the Restless is not your average storyline. Y&R fans have been watching Devon pine away after his father Neil’s new wife Hilary for weeks now. Apparently, everyone can tell that Devon is hopelessly in love with his new step-mom, except for his dad Neil.

The sparks between Hilary and Devon are undeniable, and despite Devon kissing her right before she married Neil, she still went through with the wedding. And, she refuses to admit that he has any feelings for her new step-son. According to The Young and the Restless spoilers in the July 28th edition of CBS Soaps In Depth, Devon makes a bold move and gives Hilary an ultimatum.

Y&R spoilers tease that Devon puts his foot down and tells Hilary that she either confesses she has feelings for him, or else he will leave Genoa City and not return, and he’s not bluffing! Hilary finds herself having to make one of the toughest decisions of her life. The last thing she wants to do is admit she has feelings for her husband’s son and break Neil’s heart. But, if she doesn’t come clean, she will lose Devon for good, and it’s pretty obvious to everyone that the last thing she wants is for Devon to leave Genoa City.

The Young and the Restless spoilers teased a crazy summer of drama, so it is anyone’s guess whether Hilary comes clean about her feelings or lets Devon leave Genoa City. Regardless of which choice she makes, the fall-out will be huge. What do you think Y&R fans? Do you think Hilary belongs with Neil or Devon? Do you think Devon will really leave Genoa City? Let us know what you think in the comments below, and don’t forget to check CDL for all of you’re the Young and the Restless spoilers.