The Young and the Restless Spoilers: Do Nick and Mariah Sleep Together – Mariah Seduces Nick Behind Sharon’s Back? 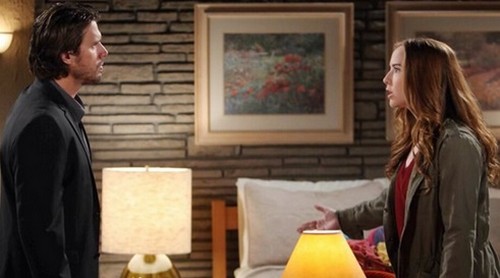 The Young and the Restless fans were thrilled to have Camryn Grimes return to the CBS soap opera as Cassie Newman’s supposedly unrelated doppelganger, Mariah, under one condition, don’t let her hook up with Cassie’s brother, Noah! Sure, Mariah isn’t technically supposed to be related to the Newmans, but considering she is a dead ringer for Cassie Newman, the thought of her hooking up with a member of the Newman Family is gross…on so many levels.

According to The Young and the Restless spoilers, the writers are actually going there, and Mariah will begin throwing herself at a member of the Newman Family. But it’s even more disturbing than we predicted; she’s not trying to hook up with Cassie’s brother, Noah, she is trying to hook up with Cassie’s dad, Nick Newman! We are seriously hoping that it doesn’t get physical because we won’t be able to hold our lunches down if Nick hooks up with his dead daughter’s doppelganger!

The Young and the Restless spoilers in the August 11th edition of CBS Soaps In Depth tease, “Mariah can be pretty sneaky when it comes to getting what she wants. Now that she has set her sights on seducing Nick, will Sharon once again become her victim?” The magazine also reveals that in an upcoming episode an unsuspecting Sharon will leave her mate Nick home alone with Mariah, and Mariah seizes the moment and tries to make a move!

So, Y&R fans, how disturbed are you by the idea of Mariah trying to seduce Nick Newman? Do you think that Nick will actually fall for her advances and hook up with a girl that has the same face as his dead daughter? Let us know what you think in the comments below and don’t forget to check CDL tomorrow for more The Young and the Restless spoilers.