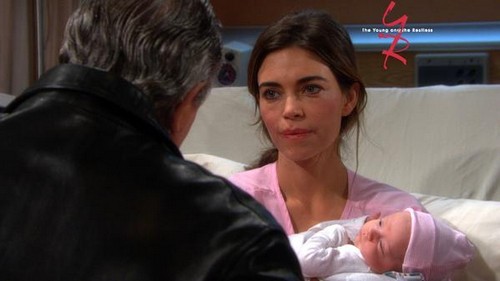 The Young and the Restless spoilers for Friday November 21 tease that this episode of the CBS soap will be filled with Jack Abbott’s current relationship woes. Jack has been ridiculously wishy-washy when it comes to his feelings for Phyllis and Kelly, it all seems to boil down to the fact that he doesn’t have the heart to let either of the ladies in his life go. Right now Phyllis (Gina Tognoni) is planning her engagement party and according to Y&R spoilers, on November 21 Kelly announces that she and Jack are still together and she thinks Jack is off “letting Phyllis down easy.”

The Young and the Restless spoilers for the Friday episode of the CBS soap also tease that Y&R fans will get a little more insight on the bizarre storyline developing between Adam Newman, Gabriel’s grandmother Constance, and Sage. It has become pretty clear that Constance (Sally Kellerman) thinks Adam is her grandson Gabriel, but Sage knows who he really is. The question is, why is Sage helping Adam Newman? Well, apparently she is doing it for free. On the Friday November 21 episode of the CBS soap Adam and Sage are bickering and he reminds her that she is “getting something out of” their Gabriel charade too. Meanwhile, Constance is beginning to get a little suspicious because her dog won’t have anything to do with Adam (Justin Hartley), and used to love Gabriel.

In other The Young and the Restless news, Summer (Hunter King) and Noah will spend Friday’s episode bickering over which one of their mothers is the worst, Sharon (Sharon Case) or Phyllis. Well, considering that’s like choosing the lesser of two evils, it could be Christmas before they decide on a winner. And, Nick Newman surprises his family and up and leaves Genoa City, he heads to a cabin to do some soul searching and befriends a stray dog.

So Y&R fans, how much longer can Jack play Phyllis and Kelly before one of them snaps on him? Is he just trying to have his cake and eat it too? What do you think Sage is getting out of helping Adam Newman? Is he paying her cash, or helping her out with a scheme of her own? Let us know what you think in the comments below and don’t forget to check CDL tomorrow for more The Young and the Restless spoilers and news.