The Young and the Restless Spoilers: Nikki Insists Victoria’s Baby’s DNA Test, Victor Says No – Nick and Grace Hook Up 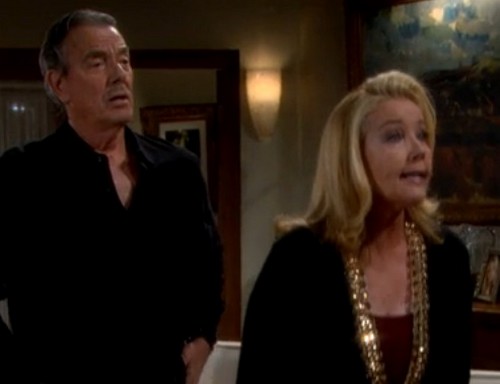 The Young and the Restless spoilers tease that the November 20 episode of the CBS soap will definitely be an interesting one. When Y&R comings and goings revealed that Sharon Newman’s old friend Grace Turner was returning for another arc – we knew she would spice things up in Genoa City. According to The Young and the Restless spoilers for Thursday’s episode, Grace pays Nick Newman a visit while he is drinking his sorrows away.

According to The Young and the Restless spoilers from CDL’s exclusive source, Nick (Joshua Morrow) finishes venting to Grace about Sharon’s (Sharon Case) latest misdeed, and then Nick and Grace fall in to bed together and begin ripping each other’s clothes off. In the midst of their hot and steamy foreplay Nick suddenly realizes that he is doing exactly what his father Victor said he does, jumping into another relationship, so he promptly kicks Grace out despite her protests.

In other The Young and the Restless news for November 20, Nikki (Melody Thomas Scott) and Victor pay Victoria a visit at the hospital and bond with their new granddaughter. Nikki pressures Victoria to get a DNA test because she doesn’t want her to have any regrets like she did with Dylan (Steve Burton). However, Y&R spoilers tease that Victor is against it and seems to think that it doesn’t matter who her father is and the baby’s last name should be Newman.

The Young and the Restless spoilers also tease that Lily has a one-track mind and is determined to find out who the new lady in Devon’s life is. Lily sets up a lunch date and orders Devon to bring her along, naturally Hilary is concerned. But, the two lovebirds can cross Colin off their list of possible snitches – because on November 20 Devon caves and pays him the blackmail money. Colin has problems of his own to deal with though, because when he goes to pay off the loan sharks he owes money to – Jill and Officer Harding catch him red-handed.

So Y&R fans, were you surprised by how quickly Nick jumped in bed with Grace? Do you think this was a one time deal, or Grace is going to be able to finally sink her claws in to Nick? Victor seems adamant that Victoria doesn’t get a DNA test – do you think he is going to pull a classic Victor (Eric Braeden) move and meddle in his grand-daughter’s paternity drama? Let us know what you think in the comments below and don’t forget to check CDL tomorrow for more The Young and the Restless spoilers and news.