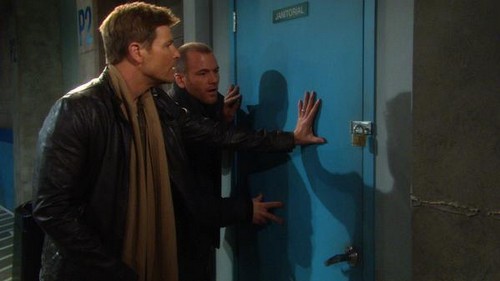 The Young and the Restless spoilers for Tuesday November 18 tease another drama-packed episode of the CBS soap. Jack Abbott has been a mess lately, he can’t seem to make up his mind between Kelly and Phyllis, and he clearly doesn’t have the heart or courage to break up with either of them. Phyllis is currently planning her engagement party to Jack and probably isn’t going to be very pleased with her fiancé, because according to CDL’s exclusive Y&R spoilers source on Tuesday’s episode Jack runs to the hospital to be by Kelly’s side while she watches over Maureen.

Meanwhile at the hospital, Billy and Stitch are both trying to be Victoria’s leading baby-daddy, and both potential sperm donors are already smitten with her baby girl and convinced she must be theirs. According to Y&R spoilers on the November 18 episode Victoria reveals to Stitch that she knows he didn’t kill his father and also informs him that his mother Maureen is the person who locked her in the janitor’s closet. While Victoria and Stitch are having a heart to heart, Abby Newman gives Billy a pep talk and encourages him to make another attempt at reconciling with Victoria.

In other The Young and the Restless news, Colin once again proves how much of a snake he really is and blackmails Devon and Hilary. He informs the lovers that if they don’t pay him $2 Million, he is going to tell Neil about their hot and steamy affair. Naturally Hilary is shaking in her boots, but Devon threatens to go to the police. And Y&R spoilers also tease that on Tuesday’s episode fans can expect to see Victor and Nikki having a heart to heart, and working on their complicated relationship.

So Y&R fans, how much longer do you think Jack can keep running back and forth between Kelly and Phyllis before this whole thing blows up in his face? Which woman would you rather see him with? Who do you think will wind up being the father of Victoria’s baby girl? Will Devon pay up, or let Colin tell Neil the truth? Let us know what you think in the comments below and don’t forget to check CDL tomorrow for more The Young and the Restless spoilers and news.