The Young and the Restless Spoilers: Is Victoria Pregnant – Apparent Morning Sickness – Jack and Kelly Kiss! 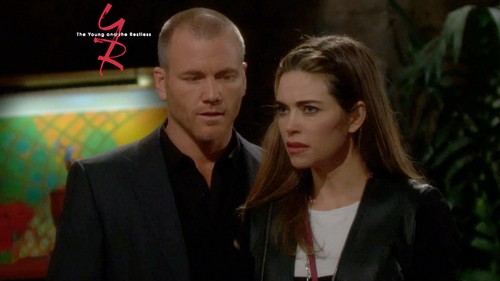 According to Y&R spoilers, there might be a problematic bun in the oven on CBS’s daytime soap opera The Young and the Restless. We speculated a few weeks ago that Victoria Newman may wind up pregnant, and it looks like we weren’t too far off. Victoria and her soon to be ex Bill Abbott were working through their marriage for quite a while and they slept together one last time before officially separating. The next day Victoria went to the bar and drank her sorrows away and then hooked up with her new love interest Stitch in the backseat of her car.

We speculated that it would be a typical soap opera story line if Victoria wound up pregnant, because she would have no idea whether the baby was Billy’s or Stitch’s. A lot of Y&R fans begged to differ with our theory, however it looks like Jill Farren Phelps and her predictable writing team might actually be going that route.

In the April 24th episode of The Young and the Restless Victoria and Stitch have a date in the Genoa City park. Stitch buys Victoria a hotdog, but their date is quickly foiled when Victoria becomes suddenly ill and begins vomiting. Sure, we may be jumping to conclusions, but generally whenever soap opera characters show any signs of an early pregnancy, it is because they are indeed pregnant.

Also during the April 24th episode of The Young and the Restless Jack and Kelly head to a concert in the park, and share a kiss. Summer watches from the woods, furious that her father is hooking up with Kelly while her Mom Phyllis lies in a coma. Victoria and Stitch and Jack and Kelly aren’t the only couples to appear in the April 23rd episode. Billy and Chelsea share a tender moment while caring for her sick son Connor as well.

Do you think that there is any chance that Victoria Newman is pregnant with either Stitch or Billy’s baby? If she really is pregnant, who do you hope the father is? And, what are your thoughts on Jack and Kelly and Billy and Chelsea? Do either pairings have a chance at any real relationship? Let us know what you think in the comment section below and don’t forget to check CDL tomorrow for more The Young and the Restless spoilers.

Here is what fans on Soap Opera Spy think about Victoria’s possible pregnancy with Stitch or Billy as the father:

I find it strange that Victoria would be pregnant after all the times she and Billy tried to have a baby, nope its not Victoria.

It would really be better if Victoria isn’t pregnant, right? Some people think that she isn’t pregnant because she and Billy tried unsuccessfully to conceive a child for so long. We’ll see the truth soon enough and then the paternity drama is bound to be wild.