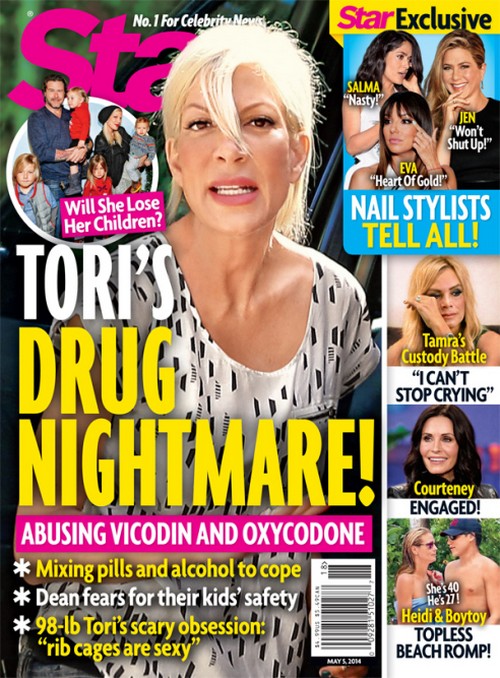 If Tori Spelling doesn’t get her act together, she could seriously risk losing custody of her children. According to new reports, Tori has allegedly taken to abusing pain pills, including prescription medicine Vicodin and Oxycodone. She’s also dropped below 98 pounds, which has caused Tori to take on a skeletal appearance with her ribs popping out in every outfit she wears.

I don’t think Tori quite realizes the lows that she’s sunk to, but then again, most people in her situation wouldn’t. She’s just been cheated on multiple times by her husband, Dean McDermott, although I maintain that she always knew about his affairs. However, this is the first time he’s been caught so red-handed, so Tori couldn’t ignore this one the way she ignored all the others. That ended up leading to the friction in their marriage, and the decision to take on a Lifetime reality show to ‘fix’ their relationship [because everyone turns to reality television to fix their marriages, obviously].

Anyway, Star Magazine alleges that because of their living situation and Tori’s abuse of pain pills, Dean is starting to worry about his children’s safety. A source close to the couple tells Star, “Tori paints herself as the perfect mom, but her version of reality is nothing but distortion. If Dean left, she’d have to learn to cook, read stories, and be a good mom. She’d lose her worst employee.”

Lately, she’s reportedly gotten worse, with an increase in the pill-popping and less focus on taking care of her kids. Maybe the stress of the show is becoming too much for her? Either way, the source also adds, “Her image is more important to her than being a loving wife and mother. It’s all for show.”

Then again, this could all be a hit piece leaked by Dean’s people to make him look more sympathetic, and try to paint Tori in a negative light. Is it working? I can easily believe that both Tori and Dean have their problems, but I would equate them equally on the famewhore scale. However, if Tori does lose custody of her kids because of her negligent parenting, I don’t know if Dean is a significantly better alternative.

Star also has a feature on Heidi Klum and her new boy toy, Vito Schnabel, plus pictures of their near-naked ‘beach romp‘ last week.

Plus, Courteney Cox is allegedly engaged to her boyfriend, Johnny McDaid, which wouldn’t come as much of a surprise considering a marriage has been rumored for some time.