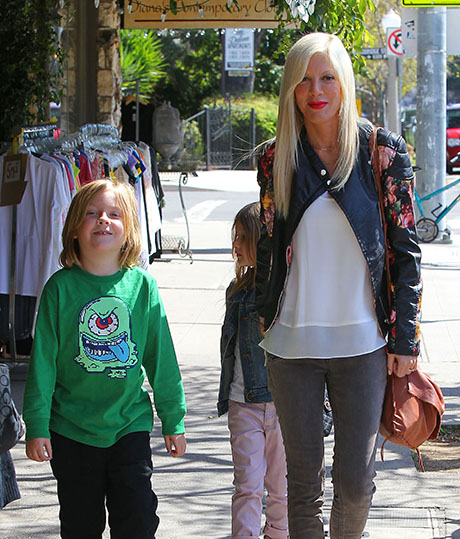 Tori Spelling might not ever trust her cheating husband, Dean McDermott, again but that doesn’t mean she’s not trying to make something work out — for the sake of her family. In an interview with Us Weekly, Tori opens up about this scandal and doesn’t hold back anything. Just like Elsa in the critically-acclaimed movie Frozen, she let’s everything go. [YES! Finally, I’ve gotten to use a Frozen reference!]

While this interview might not immediately heal the broken relationship between the two, it’s nice to hear Tori directly addressing the issues she’s tried so hard to avoid for so long. There was a good, long period where she wouldn’t comment on anything — even when evidence of Dean’s cheating was blatant and obvious.

The actress tells the mag, “He was my soulmate, but he completely broke my heart.” She continues, “He cheated on me. One of my worst fears came true. On some level I never thought it would really happen.

After Dean admitted to cheating on Tori with Emily Goodhand, she said it was clear to her that he’d hit rock bottom and that treatment — or some form of counseling — was needed ASAP. “He sounded remorseful. He sounded like a husband who had gotten caught,” she recalls in the interview. “He took full responsibility. “He had hurt me and the family, and it all crumbled. He needed to go away and work on himself. I agreed… Because what else could we do? How could we live in the same house? How could we go on?”

Tori, who’s clearly an emotional wreck (but trying to remain strong) at the moment, says, “I don’t know if my marriage can be saved.” However, she’s trying to keep their family together — no matter what it takes.

“You don’t stop loving someone because they do something really bad to you.” But this doesn’t mean that, even if reconciliation does happen, the trust between her and Dean will be magically restored. “It makes you not trust anything that’s happened in your relationship.”

What do you make of Tori’s daring fight to salvage this shipwreck of a marriage? Is it worth it? Let us know your thoughts in the comments section below!