Tori Spelling Hospitalized For Nervous Breakdown NOT Ebola Over The Weekend 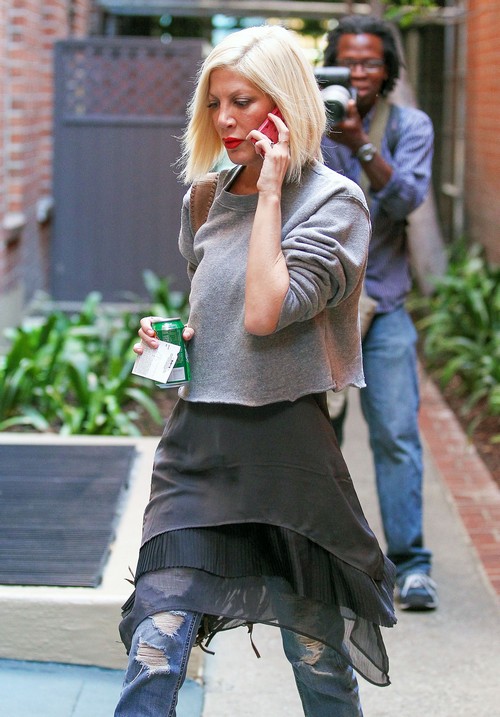 Tori Spelling is either having a full blown nervous breakdown meltdown, or she’s incredibly committed to increasing ratings for her reality show, Lifetime’s True Tori. Or perhaps both.

According to TMZ, Tori Spelling was hospitalized over the weekend after suffering from a nervous breakdown, and Tori’s friends are all concerned about how her breakdown is affecting her life. Apparently, Tori used the Ebola excuse when she checked herself into the hospital, but friends are claiming that Tori’s slowly unraveling due to her nervous breakdown.

Honestly, Tori Spelling’s nervous breakdown doesn’t come as a huge shock to us. First and foremost, Tori’s marriage is an absolute mess, and a sham more than anything else. Even though she would have willingly participated in the sham aspect, it’s gotta suck when your husband is constantly cheating on you and becoming an alcoholic, to boot.

But even if Tori was willing to put aside her marital issues, there’s the fact that Tori Spelling and Dean McDermott are also broke. True Tori is their last [and probably] only chance of staying financially afloat and not drowning in their debt, but the show’s ratings are so poor that it’s likely to get cancelled. Tori can famewhore until the cows come home, but there’s no easy solution to financial problems. Plus, we all know Tori’s acting career is more or less kaput, and right now, her scripted TV career is on very shaky grounds.

Lastly, Tori’s also an excellent reality star, and she knows what needs to happen to land her name in the news and increase the publicity surrounding her show. I’m not saying that Tori isn’t suffering from a nervous breakdown, but I also don’t think it’s a coincidence this news was leaked to TMZ. I think it’s a self-feeding cycle, with Tori making herself sick and then the media latching on to it with her encouragement.