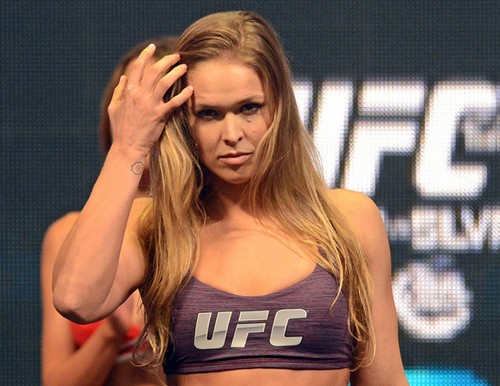 When Ronda Rousey showed up at SummerSlam and gave Stephanie McMahon a nod and four horsewomen signal, virtually every WWE writer on the planet started the rumor mills. After the rumors settled, news was released of a more direct nature that WWE is, indeed, looking at working with the MMA superstar. While on the surface, this sounds like an awesome pairing, it would be a huge mistake.

Here are five good reasons why Ronda Rousey would be a poor idea:

When you bring in a superstar that is built on being the best in a given sport, they are not likely going to come in and look bad. That most certainly will apply for Rousey if she were to come over to WWE. Lately, the Divas have actually made some progress towards returning to former glory. With Paige, A.J. and several other great young ladies in developmental, there is reason to be optimistic. Bringing in Rousey would slow the progress and set them back even farther.

Rousey would have nobody to feud with

Given that Rousey would have to win and look good doing so, who exactly would the WWE put in that spot? Paige is not nearly ready for a program like that having only now gotten over in her heel gimmick. A.J. is far too small to be believable against the powerful Rousey. Who is left really? There are no good fits that I can think of.

Rousey would have to be booked as a beast

Rousey would be the female equivalent of Brock Lesnar if she were to come over to WWE. The Diva’s championship would have to be her focus and that won’t work because of the damage it would cause to existing runs. Rousey is far too powerful to come in and battle an undercard type gal. The timing is all wrong. Perhaps Paige a year from now, but not yet.

Rousey would be yet another financial strain

It is no secret that WWE is struggling financially in comparison to previous years. Rousey would cost a small fortune to get and the money could be much better spent elsewhere. Bringing in Rousey would have no guarantees of return and looks to be a bad investment at the moment.

Rousey would be part time at best

This is the heart of the problem. If Rousey were to come over to WWE and be a full time performer, that would change everything. Rousey would be an awesome fit. The problems is that she is already a star in MMA and has little reason to leave. That said, her involvement