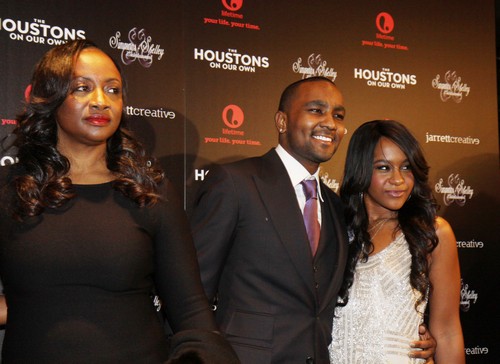 Houston, we have a problem. The late great Whitney Houston must be rolling in her grave over all the tomfoolery going on in her family right now. Quite a lot has transpired and all has led to Whitney’s manager/sister-in-law Pat Houston filing a restraining order against Whitney’s son-in-law Nick Gordon, who is the husband of Whitney’s daughter Bobbi Kristina. The filing was in response to Nick posting photos of assault weapons (he presumably owned) to social media; the post apparently made Pat feel some kind of threatened and vulnerable way. (Especially if she felt the need to file such an order) But what happened exactly you ask? Let me try to break it all down for you a bit.

You see, Nick Gordon was always close to the Houston family even before marrying Bobbi Kristina, because before he was her husband, he was her brother. Whitney had basically adopted him and was raising him as a son figure in the same household as Bobbi Kristina. Not surprisingly, the family did not approve of the idea of these two marrying each other and it is something that has always boiled beneath the surface of their familial relations.

Pat Houston was a close friend of Whitney’s, she was married to Whitney’s brother Gary Houston and she was also Whitney’s manager in some capacity throughout various stages of her career. She is the mother of Gary Michael Houston, an aspiring rapper who allegedly put paws on Nick Gordon and delivered him a beat down during a Houston family function back in December 2013. For some reason, months later, Nick started getting his Twitter thug on and posting cryptic messages threatening Pat’s son. By the way, Pat is also the person who discovered Whitney Houston’s lifeless body back in February 2012 in a Beverly Hills hotel bathroom. To say that emotions run high in this situation would be a gross understatement.

One of the reasons Nick might have became more vocal on Twitter in March, is because that is when Bobbi received the first installment of her inheritance on March 4th, her 21st birthday. Nick likely got so excited after Bobbi bought him those new grown man toys, i.e., guns to play with, that he then felt inclined to get on Instagram and show ‘em off. The problem is he came for Pat’s son Gary Michael in a threatening manner over some old ‘ish. His tweets were pretty sensational and they were definitely meant to intimidate. It makes you wonder what he was thinking bringing it all back up.

He wasn’t thinking, he was probably too high to think. Looking at all the recent Instagram photos and aggressive tweets on Twitter, it is pretty apparent that Bobbi and Nick are under the influence of some sort of mind-altering substance. A recent photo of Bobbi Kristina has been circulating the web where she looks real skinny, haggard and is actually wearing mismatched shoes. The girl looks like she is strung out on straight crack rock in the flick and it is a sad sight to see. Meanwhile, she has been hinting at a reality show and music career on Twitter but from the looks of things, it doesn’t seem promising that she can deliver a good product.

The whole situation with the family right now is a train wreck, and it seems that Bobbi Kristina is now isolated with her brother turn husband Nick. The family does not like Nick at all, they think he is with Bobbi only for her money and fortune; they are worried about Bobbi going down the same road as her parents with drinking and drugs. It is a sad situation. It ain’t no telling how this whole mess is going to unfold but in honor of Whitney Houston’s memory and legacy I sure hope it ends well somehow. What is your perspective of this heavy load? Please share your thoughts in the comment section below.