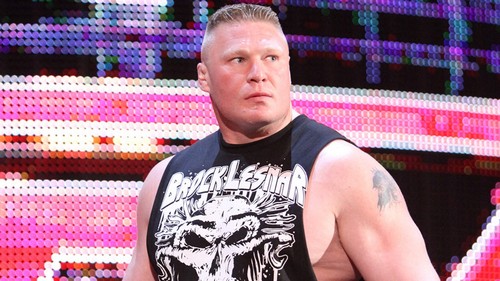 Like a predator stalks it’s next meal, Brock Lesnar has slowly begun to elevate his status as the top heel of the company. Brock has always been the beast everyone loves to see show up, but now he is becoming a truly hated heel. The heat he received last night during WWE Monday Night Raw was the ultimate pro wrestling heat…people are genuinely afraid of Brock. Who wouldn’t be? The guy is a genetic freak with a really bad attitude towards other human beings.

So what does that mean for SummerSlam?

Having Brock move up the heel food chain is both good and bad for WWE. First the bad…

With Brock Lesnar sitting at the top of the WWE bad guys, they are doing themselves a disservice. The number one bad guy in WWE should be there every week and be working regularly. Brock is a part timer that only shows up on rare occasions. This means that the Universe has to reacquaint themselves with storylines and learn to hate him all over again every time he finally decides to show up. This hurts continuity and murders any kind of pacing that is needed to move people into the seats.

At SummerSlam, Brock Lesnar is set to take on a polarizing figure as well. Despite having major heat, he could be having unpredictability to go along with hit. It is hard to imagine Brock winning the title if only because he would not be around to defend it. John Cena might be loved/hated by many, but the guy works and does so consistently.

Now for the good….Brock Lesnar is a guy that everyone wants to see. Even the fans that hate him want to see him come out. Visually he is a guy that is impossible to compare. There are no other guys in wrestling history that really compare to his athleticism and strength combination.

Lesnar will be extremely entertaining for the WWE Universe when it comes time to lace them up with John Cena this Sunday. That said, Cena will need to continue to carry the strap. That is a shame because now would be the perfect time for a long heel run as champion. Daniel Bryan still looms as a possibility on the horizon and there are no shortages of good guys coming down the pipeline.

Too bad Brock is here for a cup of coffee.